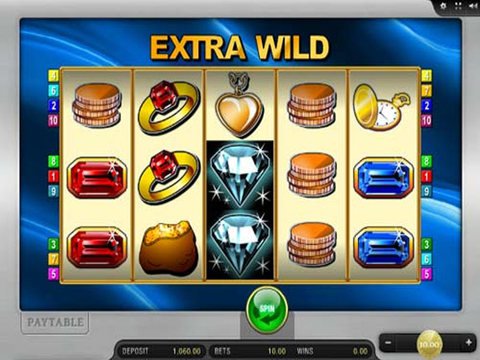 If you want to play a slot game with simple and uncomplicated rules, Extra Wild is your thing. The game has interesting special features with high paying combinations and a straightforward game dynamics that make every spin fun and enjoyable. If you want to try a free demo of Extra Wild, the game is available on this page Merkur Gaming with no download and no registration required.

Developed by gaming giant Merkur, Extra Wild may be your thing if you are looking for a simple game with great possibilities of a big win. The game has 5 reels, 3 rows, and comes with a 10 pay line combination for greater chances of winning.

Gameplay is fairly simple by getting a combination of pay line symbols which can give a good payout. Symbols used for this game includes rubies, diamonds, a gemmed ring, golden coins, and a bag full of coins. The game symbols itself speak of the simplicity of the game but with the underlying statement of winning a sizeable payout.

What makes this game uncomplicated is it does not involve any other feature except landing the same symbols on a specific reel. The game has no scatter symbols but can get you surprised because the game's name says it for itself. The game has a special wild symbol which not only replaces other icons, but multiplies your winning combination for as much as 2x, 3x, or 7x.

Prizes are also based on the formation of the symbols which can occur from left-to-right, right-to-left, or can be placed at the center of the successive reels on a given pay line. This game can be played with a minimum bet of .10 coins with a maximum amount of 10 coins. The game is ideal for low stake rollers and for beginning players. Extra Wild makes the game understandable with simple rules and a straightforward gameplay.

Play the In-game Bonus and Rewards

One thing that makes Merkur games stand out from the pack is it allows you to double your winnings by playing an in-game bonus of ladder gamble game. What this does is double your earnings and move you closer to the top or lose half of your prize. This makes the game even more challenging but is an optional part of the game.

Playing this bonus game increases your chances of winning more than what your wagered for and can be a good way to increase the challenge and fun of the game.

Jewelry-base slot machines are some of the most famous games everyone can indulge with. A similar game to Extra Wild is Starburst created by NetEnt. They have the same concept of using gems with both games having the same amount of pay lines and the same number of reels.

Canadians who would like try the game can go to reliable websites such as LVBet Casino. They offer a huge amount of bonuses including a signup bonus for new players and other great prizes.