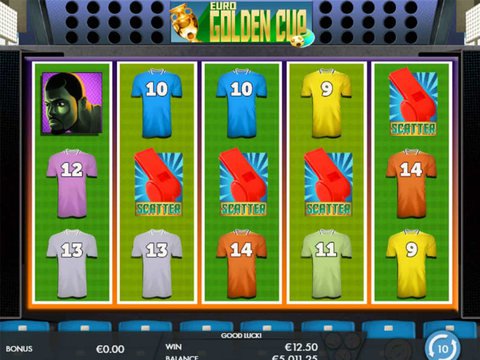 The Euro Golden Cup slot machine is a football-themed, no download game from Genesis Gaming. Football is the world's most popular sports so it makes sense to have a slot fashioned after the subject matter. You will attract a football fan but also somebody who loves the slots. You can play the game for free from Slots Million Casino. You can also try more than 1,100 other titles when you sign up with the top Canadian gambling site. After signing up, you are entitled to a $100 cash bonus, which you may use to play for money in any of the no download, no registration slots. You may also win 100 free spins each month at entirely no investment on your part.

This game was released in May 2016 in time for the Euro Cup championships. The graphics are top-notch and the soundtrack adds to the festive nature of the game. The gameplay is very much like a video game where you advance to another level, which offers the added advantage of bigger rewards and prizes. In order to do this, you will have to collect the trophies, which you can get if the flag lands on both the 1 and 5 reels.

The Level 1 features stacked wilds. When you win, you basically "score a goal." In Level 2, you unlock several mystery symbols. Behind each mystery symbol is a prize. In Level 3, which is probably the most exciting, you find yourself face to face with a goalkeeper and you will have to hit five goals.

If you are a fan of football, the Level 3 just adds another dimension to the game rather than just playing a straightforward slot.

There are five reels in this game and 25 pay lines, which are fixed. Unfortunately, there's no progressive jackpot in this game, but you will hardly notice it considering the many prizes stacked up on top of big prizes.

Playing the Bonus Round

You can trigger the bonus game by getting three or more scatters on the reels. You can collect trophies for the Play Maker Free Spins, Striker Free Spins, and Penalty Shootout Picks. The no download free demo game for the Euro Cup slot machine allows you to wager $0.01 up until $10.00, this will rack up your total wager to $250.

In terms of the football-themed games, Euro Golden Cup slot machine is certainly not unique. For instance, there's Top Trump Football Legends, which also offers some mini-games for you to enjoy. What makes the Euro Golden Cup stand out among the rest of the pack, however, is the unique gameplay. There are not enough numbers of slots out there that is this immersive. It's like playing a video game, while also winning real money at the same time. Nothing can beat that.