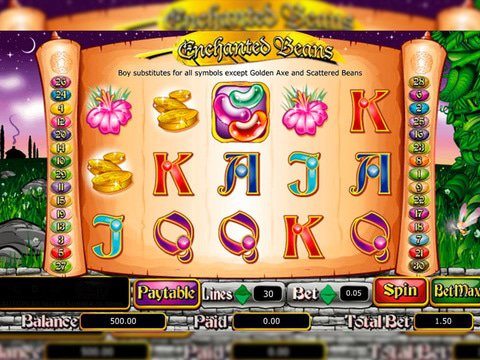 Soar through the skies and way above the illustrious clouds as you search for riches and glory that far outstrips common knowledge through the Enchanted Beans Slot Machine by Amaya Software. However, you'll do this not with the help of some innovative contraption from our modern age but with a magical bean that's bound to grow and tower through the heavens in a few breaths of time. Sounds familiar? The game is based on one of the most famous stories you've probably heard already when you were a kid - the Jack and the Beanstalk. However, the mysteries beyond the skies is something that you should meet firsthand and with the help of the no download Enchanted Beans free play slot demo, you can do your first reconnaissance in this mysterious place. Canadian gamblers have given their thumbs up on this game and you're bound to do the same in a jiffy.

Towering Beans to take you to New Heights

Looking back on what the Jack and the Beanstalk is all about, it's pretty easy to conclude just where the setting is placed on the Enchanted Beans Slot Machine - and that's on top of the Giant's Home in the sky. Here, you'll see giant rocks, grass and plants that strays from what you've thought about the world while at the far-off distance is a silhouette of a house that's definitely where the giant lives. The sky is pristine and calm as the stars twinkle, but at the center lies the reels that may just be what you need to overturn this situation and even your entire life. The reels is placed on a scroll, making it appear like the path to your riches which luckily, is the entire truth. The controls on the bottom is what will help users manipulate the 5-reel and 30-payline game with betting range that can even hit up to a staggering 570 coins. Card Icons can also be found on this mesmerizing land, but their importance may be trivial compared to other symbols. The boy on the reels is the Wild symbol of the game that's also equipped with the power of re-spin, while the magic and enchanted beans act as the scatter to provide pay anywhere on the reels. Other symbols that will help you gain considerable addition to your net worth are the Golden Axe, Castle, Harp, flower or a gold.

The Enchanted Beans Slot Machine is definitely a great spinoff of the Jack and the Beanstalk story but if you want to, there's also the Jack's Beanstalk Slot which you could play from NYX. It comes with a 5-reel and 25-payline structure with a somewhat low-end, cartoonish graphics. However, its graphics is simply far off from its true worth as the jackpot in this game can tick up to whopping $125,000, making it more than worthy to set your sights on this game.

If you're planning to play the Enchanted Beans Slot Machine, we recommend players to give it a go through Cresus Casino. Here, you'll be able to enjoy a staggering 100% match-up to $150 and a helpful 20 free spins bonus. There's also superior security here with its topnotch encryption and licensure while its multi-software system offers you massive choices of games to play with from multiple platforms.