Emperor of the Sea

Emperor of the Sea
Enjoyed playing this game?
Rate it → 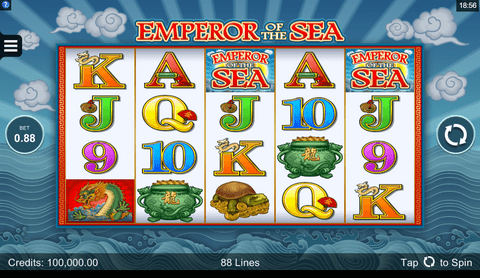 Emperor of the Sea

Emperor of the Sea Game Review

With China's grandeur and legends about mythical monsters and beasts that has spread upon various lands around the globe, it is only reasonable for one to wonder how such a country produced countless unbelievable, yet unrivaled tales. One of these tales is about Dragons and in the Emperor of the Sea Slot Machine from the ever-so popular and revered brand of Microgaming, there's a chance that you may find your answer in the mystery that looms over the Orient. Dragons have been portrayed in various means, all of which are powerful creatures but some with different origins. It is obvious as to what type of Dragon is presented in this game and with that kind of concept, it has managed to attract Canadian gamblers and beyond on its reels. If you're looking forward to play the game but would like to know more about it, the review below paired up with the Emperor of the Sea free play slot demo in this page will help you review the game.

Wealth-finding amidst the Sea Dragon's Domain

What better way to put anyone in a blood-boiling adventure, other than pinning yourself against mythical creatures that's undeniably hiding a lot of treasures for anyone to plunder, right? Though the game may not have all the Bells and Whistles you'd expect or an incredibly grand or realistic environment, it still comes with an arguably vivid and crisp graphics that will help you enjoy the game a lot easier than you could imagine. The game comes with a cartoon-like art with a background that comes in tones of blue that makes it appear as though it came from a painting. The center comes with the 5-reel and 88-payline gameplay that provides abundant winning chances for you to grab. The ways to win are fixed, but the controls of the game offers betting amount manipulation so you could initiate your tactics and pace at your own liking. Symbols on the game range from simple and irrelevant card icons, to more orient-filled symbols like Ancient Cauldrons, A turtle, Dragon and more. It also utilizes helpful symbols to aid on your path to discovering the mythical domain of the Dragon, which includes the Scatter that could grant free spins and could even activate bonus games like Growing Wilds and Rolling Reels that will surely give you a nudge and point you to the path to richness and glory.

Another orient-themed game that tells tale about Dragons like the Emperor of the Sea Slot Machine, is the 50 Dragons Slot from Aristocrat. It comes in a very different graphical perspective that's tinge in red with symbols that appear as though they were meant for paintings. The game comes with a 5-reel and 50-payline structure whilst the jackpot of the game could lead to giving you up to $2000 if you're lucky enough.

There's a lot of casinos using Microgaming, but out of all of them, we suggest that you give the game a spin through the Jackpot City Casino. It's one of the best even amongst all the casinos today, offering welcoming promotions that provide dollar-for-dollar match-up of up to $1600, 20 free spins bonus, loyalty programs and more. The site has also been in the industry for years, providing topnotch operation to ease you from worries.