Elvis The King
Enjoyed playing this game?
Rate it → 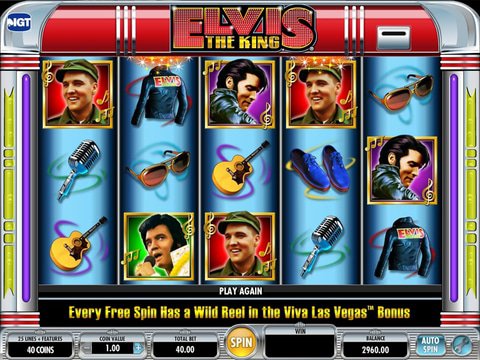 It's time to welcome back the king, with the newest introduction of Elvis themed slot games which is one of the fun IGT Slot games. The slot game is the development of the International Gaming Technology gaming developer. The slot game has a variety of several updated features, including, various symbols, and bonus rounds. However, in relation to other Elvis themed slot games, Elvis the king has a whole range of entertainment to offer to its players. There is a soundtrack that also adds up to the entertainment given to players. The slot game is comprised of 5 reels and 25 paylines, with other inclusive features such as 8 free spins, roaming wilds and tumbling reels; various cash prizes are also available. A wild and scatter symbol is also present, the bonus rounds are three in number and they are all activated using the same method. From our grizzly site, you will be able to play Elvis King Slot among other free IGT online slots.

When a player lands 3 bonus symbols on the 2nd, 3rd and 4th reels, there is a display of a new screen, with various representations of several gold records. The player is then expected to select one of them, so as to be led onto the scored bonus round. There is plenty of entertainment that comes together with the various bonus rounds. There is the Tumbling reels feature, which compare to the Gonzo's quest slot game, which is developed by NetEnt. In case of completion of a winning line, the various winning symbols are no longer visible, and there are several symbols that can be shown tumbling down from above, to take their position. In the tumbling reels feature, the spins shown can be present for a long time, giving you more chances of scoring.

In the free spins reward, there is the presence of the presence of the tumbling reels, and the roaming wild reel. The roaming wild free spins feature is present in the jukebox, is able to float around between several spins, and land on a given reel, thus creating an additional winning line. The pick'em bonus feature is available for players in the elevator, available at the heartbreak hotel. A player is required to pick several doors, as they climb through the floors of the hotel, these doors will then display the prizes or the existing broken hearts. Despite the difficulties encountered as you climb through the floors, you are assured of various generous wins. There is also the presence of the burning love mystery wild reels, which are between 1-3 wild reels as random bonus features. This is the most common, among all the reels present in the game.

Other new games for fun to play with the Elvis theme include; mildly entertaining Elvis and the more exciting Elvis Multi- Strike slot game.