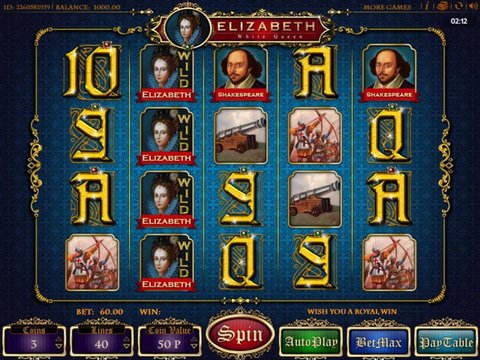 Looking back in the vast timeline and countless ages of English History, some rulers have become more renowned compared to others, one of which is Queen Elizabeth I back in the 16th Century. The sophisticated and regal years of her reign have been often deemed as the English Golden Age with no political strife and a particularly firm and stable years. Such a peaceful timeline that etched itself deep in history is something more than worthy to be placed on the reels and that it did. Cozy Games have created a game based on this Golden Age, representing the Elizabeth White Queen Slot Machine. It couldn't be any more regal and royal than this and even Canadian gamblers have found its superior elegance very fascinating. The Elizabeth White Queen free play slot demo provided in this page will give you a good view of the Royal interiors of this slot machine all in a no registration and no download version you're sure to love.

The Royal Age of Elizabethan

With the complete reverie and fame of Queen Elizabeth, even her Golden Era has been named after her - the Elizabethan Period or Era. It can be seen from this just how prestigious her reign was and it begs to question if the Elizabeth White Queen Slot Machine does justice to such a heavy-weight category. Cozy Games have definitely outdone itself in this game as it features a simple, yet very elegant and sophisticated setup adored by a dramatic blue background with surreal lightings and seamless royal patterns. The Frames and some symbols come in golden color for an undoubted sophistication while letters are carved in Old English to bring out a more regal essence out of the game. This 5-reel and 40-payline game also comes with a very lucrative set of symbols, showcasing not only Queen Elizabeth but other grand characters from her Era as well such as Shakespeare and Francis Drake. Each symbol gives you a winning relative to the amount you've bet in forms of multipliers with Drake and Shakespeare handing out about 400x of what you've placed at risk. There are also other symbols showcasing weaponries and archers along with lesser paying symbols in the form of card icons. The game truly emits a triumphant feel to it, especially with the subtle trumpets playing at the elegant background of the game.

Witness English at its finest back in the Royal days of Queen Elizabeth not only through the Elizabeth White Queen Slot Machine, but also through the Regal Riches slot game from RTG. This game shows the verdant sceneries of that golden age, paired up with symbols that showcases royalty from left to right in its 5-reel and 25-payline matrix game. Though a paltry $1000 sits atop the throne as the jackpot, there lies a greater reward in the game in the form of progressive jackpot.

Through the White Queen game from Cozy Games, you'll feel the royal and generous age when Queen Elizabeth sits atop the throne and we recommend making the most out of that by playing it at Lucky Admiral Casino. You'll be able to revel on various benefits from £10 no deposits bonus, a whopping £500 gained from a 100% match-up, monthly tournaments, various vouchers and other continuously updated bonuses.