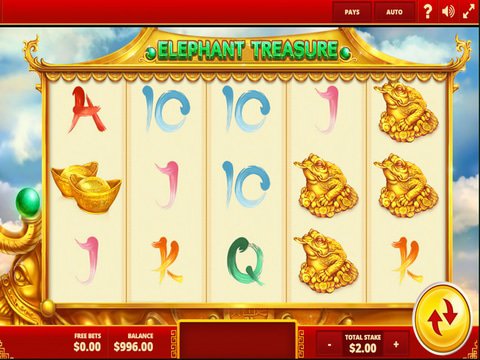 Travel back to India where people worship sacred elephants for extra luck and fortune in this new slot installment from Red Tiger software. In Elephant Treasure slot machine, you get to experience first-hand the rich Indian culture of animal worshipping and discover temples storing loads of treasures as you spin the reels. Locate gold coins and artifacts on the screen which reward you with various payout amounts. Look out also for the golden elephant character as it grants you the maximum jackpot available in this game. You can now learn more of ancient India and try this free play slot here with no download required.

Elephant Treasure has golden five reels and 20 fixed paylines for its online and mobile players. It has a medium variance gameplay which pushes you to stake high on the reels for more winnings. You can also activate its autoplay option for as much as 100 automatic spins.

The screen is filled with various golden characters and artifacts, as well as casual reel symbols, which pay you various cash rewards and bonuses. There are the usual card characters scribed in colorful strokes which grant you from 30 coins up to 80 credits max payouts. The classic gold coin rewards you as much as 100 credits; whilst the double golden rice boats pay you with up to 120 coins.

Gold animal icons are also present on the reels. The golden toad pays you as much as 150 coins; whereas the golden elephant rewards a whopping 300 credit payout for one complete line.

You should also look out for the green crystal ball which represents the slot's wild symbol. Just like any other wilds, it substitutes to any character on the reels - except for the scatter and bonus symbols - to complete a winning line. It also pays you instantly with as much as 500 coins with five of this character in one active payline.

The golden elephant still plays a vital role in terms of giving you with more bonus rewards. An elephant's head, adorned with blue and fold gemstones, acts as the scatter symbol on the reels. Land three or more of this symbol anywhere on the reels, and you'll get rewarded with 8 free games.

The most awarding symbol belongs to the bonus icon which instantly wins you as much as 888 credits. It is quite a challenge to land this one and only bonus character on the screen, yet it rewards you the most in Elephant Treasure slot machine.

More Fun with Animals in other Reels

Animals won't stop filling your reels as you can also try Sheriff Gaming's Zoo Zillionaire slot machine. Zoo Zillionaire slot machine has five reels and 20 paylines filled with various animal characters reeling. Complete combinations of giraffes, zebras, elephants and many other zoo symbols on the screen to get rewarded with different payout amounts. Look out for the zoo's welcome arch as it grants you with bonus free spins.

You can now experience the demo version of Elephant Treasure at Video Slots Casino with no registration requirement. Canadian players are also welcomed to participate to get no deposit and free spin bonuses from this site.