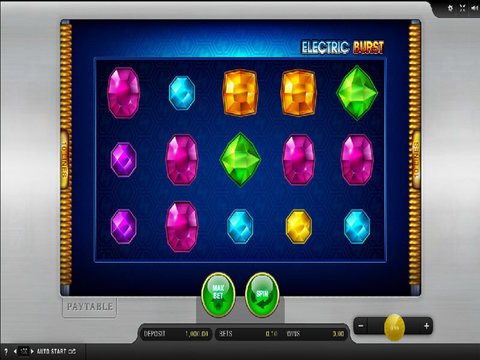 Ever heard of Nikola Tesla and his contribution to electricity? This game from Merkur will remind you of how important electricity has been to our society. Electric Burst may be interesting for those who have a knack for both physics and gambling as the game has some electrifying graphics with sparkling gems of all shapes and colors. If you want to try a free demo version of Electric Burst, a no download no registration game can be found on this page Merkur Gaming.

Electric Burst has an interesting lack of a feature that makes it stand out from other slot machines. The game does not offer much on its graphics but the rewards can be excitingly fun. Developed by gaming giant Merkur, Electric Burst has the standard precious gem symbols on its reel and an electric burst icon which can be characterless to describe. The game though has a good RTP (Return to Player) with over 96% which makes it a good game for beginners and low-risk rollers.

With 5 reels and 10 fixed pay lines, Electric Burst has more to offer than its simplicity. Bets can be raised for as low as .05 coins and with a maximum of 10.00 coins per spin. Hitting the jackpot would give you an energizing 10,000 coins and landing 3 jewels on the reel will award you with a decent 20.00 coins.

Electric Burst is beautifully done but lacks substance as compared to other games of the same theme. The gemstones are artistically created with 3D rendering and graphics that make it a little interesting. This game from Merkur makes you think of antiquated games that have been in the market for a long time. But don't underestimate the payout because it can be lucrative if you have lady luck on your side. This game is ideal for beginners because of the low volatility of the game which stills offers some kind of fun.

Merkur has a way of engaging players to get more into the action by offering an in-game bonus ladder gamble game. This game allows you to double your rewards by picking the correct sequence of playing cards on the screen. It can be a fun game as it allows you to get twice the amount of your initial earnings. Betting though can be a two edged sword as losing the bonus round would leave you with only have of your total earnings.

Another game that lacks some standard features of a slot machine is the game developed by Microgaming, Reel Gems. Both have the concept of using jewel stones for its symbols and lack of some features one way or another. Reel Gems and Electric Burst has the same number of reels with the preceding one having no in-game bonus rounds.

Canadians can play this game on LVBet Casino with a signup bonus of 1,000 free spins and more.