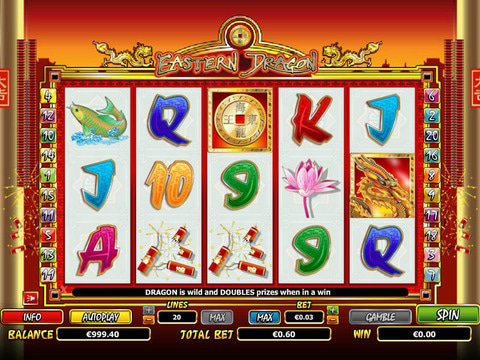 Just like many themes in the waging industry, Orient games are undeniably part of those that are more overused than others. Still, the mysterious vibe of these games give them invigorating and rousing environments that any wager have surely been more than happy to play repeatedly. NextGen Gaming is fully aware of the prestige of its theme and it has made it even more interesting with the help of the fabled Eastern Dragon Slot Machine. Enjoy the majestic aura of this breathtaking game as it takes you to a world that's brimming with Chinese elements. Not to mention, there's lots of opportunities to take advantage in this game which even Canadian Gamblers have found to be very appealing. Try out the game yourself and see if it's worthy of its prestige by reviewing it here on this page, with the aid of the Eastern Dragon Free play slot demo.

Despite the game looking simple, there's a lot of elements from its background down to its reels, which are truly worth taking note of. The background features a red silhouette of a city in China while the skies bring up the mood with a sunset vibe. The reels are held on a column with Chinese characters while the reels and its symbols greatly complement the overall graphics of the game. The Eastern Dragon is truly a game that's built with harmonious elements and its control systems at the bottom are also very praiseworthy as it can easily help you manipulate the 5-reel and 20-payline setup of the game along with the stakes you'll bet. The game also makes use of a gamble feature to those who are courageous to take the double-or-nothing deal. The game makes use of different ordinary symbols from cards to firecrackers, lotus blooms, Chinese lantern and even a koi carp. However, what you would surely want to get are the scatter that could award up to 200x your bet plus free games and the dragon that will double your winnings and even help you garner success through its substituting capability. Witness this game's prestige and be able to earn more than what you may have initially expected.

The idea of dragons in the Orient has been a thing in China for countless years which makes it unsurprising that it isn't only the Eastern Dragon Slot machine with this kind of theme. There's also the 50 Dragons Slot which you could try here. It's made by Aristocrat with a 5-reel and 50-payline structure, while its graphics is pretty much comparable to Eastern Dragon. It comes with a $2000 jackpot prize and though it may not be that much for high-rollers it is still an epic game to try and earn from, easily.

Everything is always better with more advantages and that goes true with playing the Eastern Dragon Slot Machine. We suggest that players try to play Eastern Dragon at Slots Million Casino and experience more advantages than you could ever imagine. Aside from 100 free spins bonus, 100% match-up to $100 and regular bonuses, it also boasts and takes pride on its superb security, support and overall gaming operation.