Dynasty of Ming
Enjoyed playing this game?
Rate it → 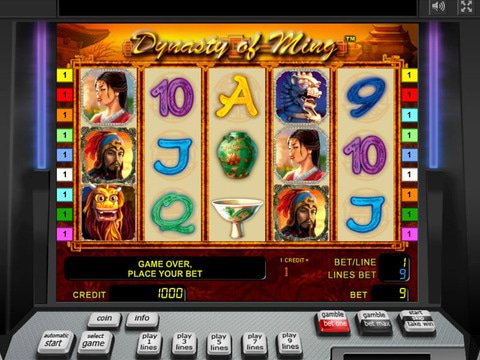 Bring back the memories of the prosperous dynasty of all time and play the Dynasty of Ming slot machine. Relive the history through the extravagant kingdom of Ming. See how you can share with their overflowing wealth by playing the free demo game on this page. You do not need to register and no download is required in order to access this Asian themed game.

Novomatic Software has developed this game in line with the Chinese history. On top of the five spinning reels of this game, you will see the grand palace and temples of the Ming dynasty. The game's setting has the golden sunset vibes as the whole screen is overpowered by the color of the sunrays.

Icons used within the game are inspired by the conserved treasures of the Chinese people. During the game, you will see some vases with oriental design, blue necklaces, and statues made of marble. The common playing card symbols starting from 9 through Ace are also seen in the reels.

This five-reel game allows you to bet on 9 pay lines that you can also modify. If you prefer a less complicated game, you can even play on a single pay line. Increase it as much as you want because you can also play 3, 5, and 7, up to 9 betting lines. On each line, you are able to place wager ranging between 1 to 200 coins. Both low and high rollers can be accommodated on this game.

Dynasty of Ming slot machine also has the Gamble Feature, where you can risk your winnings in order to gain more. You simply need to guess whether the next playing card will be red or black. Correct answers will double your winnings, but incorrect answer will wipe out your prize for the said round.

Wealth of the Ming

Matching three or more similar symbols on the reels will let you earn certain amount of prize. To see the complete list of prizes, you can click on the Info button at the bottom of the screen. Basically, the numbers and letters can shell out a maximum of 125. Painted vases and necklace can yield up to 400, while the Geisha and the marble statue can produce up to 750.

Make sure to keep an eye on the Chinese dragon. This serves as the scatter symbol of the game that can lead you to 15 free spins. During the bonus spins, your winnings will be multiplied thrice. Aside from the free games, you will also get 4500 when you hit five dragons at the same time.

When you see the emperor, pay respect as he can pay you up to 9000. He acts as the wild symbol of the game and he can replace other symbols within the reels.

You can also search for treasures in the World Match's Mandarin Fortune slot machine. This game has a higher pay lines compared to Dynasty of Ming, but both games feature a fantastic image of Asian culture.

Cashpot Casino offers Dynasty of Ming free play slot for Canadian players. You can check it out using your mobile phones or desktop.