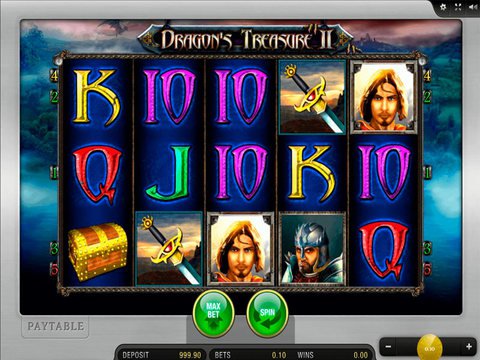 Mythical creatures have always provided interest among people and this game by Merkur Gaming is one of them. The slot machine offers every player a chance to venture into an exciting dragonland adventure with intriguing characters that engage you throughout your gameplay. Try the no download no registration demo version of the game which can be found on this page Merkur Gaming.

This excitingly fun game from Merkur Gaming takes you back to an ancient world with a mythological dragon obstructing the heroic knight's quest for the hidden dragon's treasure. Dragon's Treasure II is a sequel to the online casino game with the same namesake. The previous game became so popular that the gaming giant decided to create a new version with an improved gameplay but keeps the same concept of the original game.

Dragon's Treasure II is a progressive game with 5 reels and 3 rows. It is a 5 pay line slot that takes you back into the exciting world of the Middle Ages with knights and dragons that dominate the entire screen.

Symbols used for the game are the typical deck of card symbols which are low paying characters. The high paying ones are the dragon which is the scatter symbol, the knight which is the wild, the king, a sword, and the treasure chest.

Spins can be wagered from 5 coins to a maximum of 10 coins. Maximum payout per winning combination can reach to a total of 10,000 coins considering that you bet with the maximum amount. A free bonus can also be activated by getting a combination of the scatter symbol in the reel. It can give you a good free game with 10 free spins.

Being a progressive game, Dragon's Treasure II is an exciting game with an increasing jackpot prize. The total earnings can also be doubled with Merkurs ladder gamble bonus game which is part of the in-game bonus.

This bonus game is an intrinsic characteristic of every Merkur game, playing this optional game would allow you to double the amount of your initial reward creating a bigger bankroll. The in-game bonus lets you choose the correct sequence of cards based on the color of the card that comes next.

Surprisingly easy in concept, this bonus game can be challenging as betting on the wrong card color will remove your betting prize off the total amount of your earnings. Betting on the correct card color can increase your rewards and can even double it.

Playtech developed a similar game using the mythical creatures as the center of the plot. The Dragon Kingdom is a game that is comprised of dragons and other medieval symbols including a spell book and magical potions. It is also a 5 reel, 3-row slot machine.

Dragon's Treasure is a good game to play for both advanced and starting players. Canadians can visit LVBet Casino for the real version of the game. The casino offers great bonuses to players including a 100% signup bonus which can be used to play for hours of gaming fun.