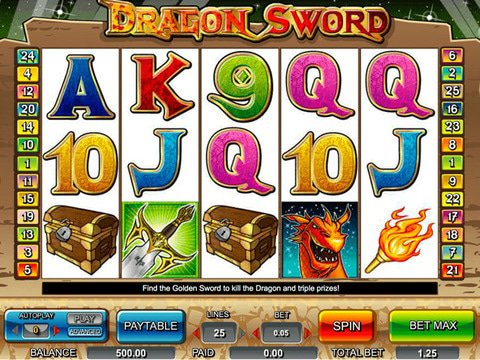 Out of all the lore, myths and legends in existence, Dragons outstripped other mythical creatures whether it be in terms of mystical prowess or overall strength. This has made it a very prestigious creature that anyone would long to defeat as basically doing so will bring the title of hero that's roped in with other massive benefits. These may have been impossible back then but with games like the Dragon Sword Slot Machine from Amaya Software, this feat has become mere clicks away. Even with the vast array of Dragon-themed options available, this game has still placed a comfy top spot among others for all great reasons. If you're intrigued or even in doubt of its true capability, you don't need to linger any longer as the no download Dragon Sword free play slot demo here would allow you to challenge the game with no registration required and no real danger involved.

Though battling a dragon is simply impossible not just because it's a fantasy-based creature but because of its superior battle prowess, the Dragon Sword Machine could help you deal with it and even grant you amazing riches with just few clicks and a drop of extreme luck. As you step your foot and set your eyes on this new dimension, you'll see the glorious brilliance of a hero's silhouette, illuminating the greenish night sky while the dragon takes a peek and prepares to battle at the opposite end of the screen. The long road is winding but at the center, chances of strengthening yourself to defeat the dragon is present. The controls at the bottom provide great control with the risk you'll take in each spin that will certainly help you significantly increase your chances of winning. This 5-reel and 25-payline game will introduce you not only to card icons that's basically at the bottom of the pack, but also other items that may help you on your endeavor from a torch, treasure chest, an earth and fire dragon, the Gilded Knight and the all-mighty Dragon Sword. The Knight and the Dragon Sword holds a different power that deviates from other icons proving that they're special. The Knight is the wild of the game while the Dragon Sword is the scatter that could bring forth free spins that may allow you to gain massive wins in this ancient and mighty realm.

Even the mighty dragon theme can be taken in various paths from the glorious image borne from the Dragon Sword Slot Machine to even an exuberant dragon theme. The Dragon Story Slot is one such example, developed by NextGen Gaming with a 5-reel and 25-payline setup. This game comes with a visually compelling 3D Setup that's incredibly fun and engaging. On top of that, it exhibits a unique gameplay that's bound to impress anyone with its highly-rewarding nature.

The special symbols of the Dragon Sword Slot Machine realm will help you increase your chances of winning, but it may not be enough. Heed our suggestion and play the game in Cresus Casino and you could multiply your chances again. You'll be rewarded promptly with a dollar-for-dollar to $150 deposit bonus and 20 free spins bonus as you enter here. There is also more to expect like VIP Program, Loyalty program and beyond.