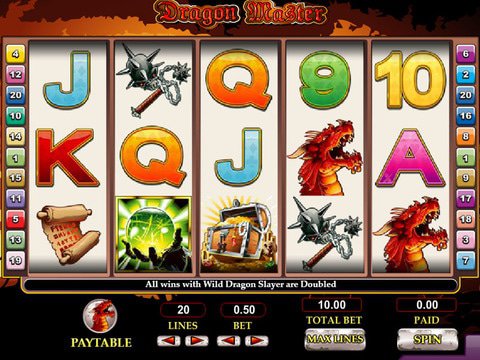 Out of all the themes that players would have ever encountered on various web-based casinos, there's no doubt that medieval-themed games are always something that anyone could appreciate. This is all truer when it comes to dragon-themed games that will just make any wagers shake in excitement with all the fun, thrilling and valiant adventures awaiting you on the reels. Players could never have a lacking supply of dragon-theme games, but what you'd surely love is something that could easily place at the top of the industry. The 888 Holdings have produced such a game - the Dragon Master Slot Machine. Conquer the dragon and bring home the glory while spreading the news that you've slayed the monster on its lair, which could possibly bring you all the treasures and land you want in the form of coins in the game. Enter the No download Dragon Master free play slot demo of this game through this page and witness a glorious adventure like no other all with no risks.

Defeating Dragons? It may be an illustrious and nigh-impossible feat for little old you, but in this game, you'll have the power to do that just by looking for symbols and getting winning combinations in the magnificent 5-reel and 20-payline matrix of the game. The backdrop of the game shows a devastating scenery plunged with the fire of the dragon while the reels lie comfortably at the center with a simply-made control system at the bottom. Though the reels and the design of the game itself is incredibly simple and may not be the fittest for the theme of the game, they are complete intuitive and easy to use for players - even beginners. What matters most on the game are its symbols as well, that ranges from common card symbols to scrolls, maces, a dragon head and a scintillating treasure. There's also the shining crystal ball that's treated as the scatter of the game, which could bring you free games with 3 or more of it on the reels. There's also the Wild or Substitute symbol of the game, embodied by the Dragon slayer and with the capability to hand you out winning combinations easier. The game's feature may not be as overly abundant as some games, but it's enough to keep anyone dazzled, intrigued and entertained for hours and hours of gameplay.

As mentioned before, players certainly wouldn't have shortage of Dragon-themed games. There are also games other than Dragon Master Slot Machine, which could bring you to this type of fantasy world. One such game is the Dragon Emperor Slot Machine from Aristocrat, boasting a 5-reel and 25-payline matrix for you to play with. It comes with the brand's 243 Ways-to-win, a waging range that could go up to $120 and astounding prices that could be your door to richness.

If you want to win it big in this glorious and dangerous adventure, playing the Dragon Masters Slot machine, the most ideal place we recommend you to give it a spin is at 888 Casino. 888 is one of the most prominent brand in the market and its brimming with bonus from its no deposit bonus of $88 to its match-up promotion up to $200 and a whole lot more, making it a site worthy for anyone to splurge and wage.