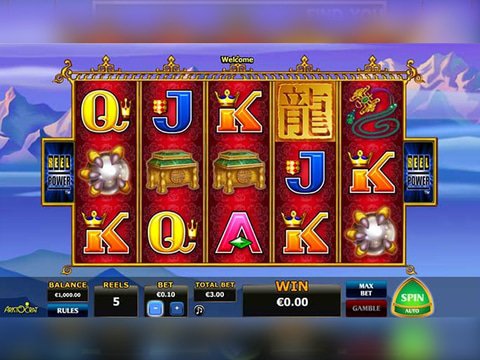 Far Eastern flavoured slots in the guise of Dragon Emperor slot machine appear to be trending at the Aristocrat design studios. The REEL Powerâ„¢ game has 243 active win ways and is the second oriental themed betting opportunity to emanate from the Australian software supplier in recent months. Players in Canada have the option of wagering on Dragon Emperor slot on their PCs or on supported mobile devices. Besides mainstream game features such as scatters, wilds and free spins, there's the exclusive Reel Shuffleâ„¢ feature designed to enhance the win probability. Read the full review below before experiencing Dragon Emperor free play slot available in no download demo mode here. Then it's simply a matter of registering an account at Slots Magic casino, where a free spins bonus facilitates complementary game time on Dragon Emperor slot machine!

A typical Chinese landscape featuring snow covered peaks back the ornate crimson reels of Dragon Emperor slot machine. As can be expected, there's a fair mix of themed symbols and the high value playing card icons to match on the reels. The Dragon Emperor wild offers the top payout in the game, delivering 1,000x the line bet for five-of-a-kind. Despite the permanent REEL Powerâ„¢ payways - Aristocrat's version of 243 Ways-to-Win slots - the game is structured as a 30 payline slot. Coin denominations of $0.02 to $4.00 translate into minimum and maximum wagers per spin of $0.60 and $120, respectively, creating the perfect opportunity for both high rollers and betting beginners in Canada and beyond.

In addition to the conventional wild, there's a Chinese character scatter that provides scatter wins and triggers up to 15 free spins. The major excitement is the Reel Shuffleâ„¢ feature that's activated when three heavily stylised Dragon Emperor special wild symbols land on reel 5. The reels are then shuffled to deliver additional payout opportunities. The best way to get to grips with this unique and exciting bonus feature is to try the game out in the no registration free play demo mode. You'll then be better informed as to the unremitting highs and gloomy lows associated with real money play at an online or mobile casino recommended for Canadians!

Dragon Emperor slot machine is similar in so many ways to Aristocrat's Double Happiness slot. Both share an exotic oriental theme, a top 1,000x payout in the base game and imagery that speaks of the Far East. Despite a 25 payline betting structure and a betting range of $0.30 to $60 per spin, there's plenty to play for in Double Happiness slot - 25 free spins with Roaming wilds, 10x multipliers and more. When one considers the unique features integrated into top Aristocrat slots, it's no wonder the Aussie game development brand features prominently at the best casinos for Canadians. Now that you've read the review, why not give the reels of twirl of Dragon Emperor slot machine to see if you're lucky enough to trigger the shuffle feature and win big!