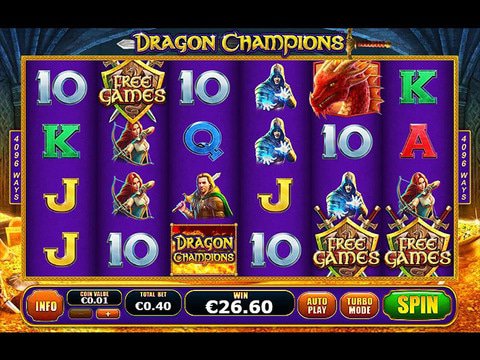 A game centered on the valiant and brave knights fighting ferocious and mind-boggling frames of dragons and their magical prowess, would never fail to make players sweat in excitement and anticipation for what's to come. This is especially true if you're waiting for your turn of luck and bring home massive cash at the end, which is exactly what you'll get with the product from Playtech, entitled the Dragon Champions Slot Machine. Join these brave warriors as they raid the den of a dragon known for their fire-breathing and kingly abilities topped with their penchant for amassing treasures. There's definitely lots of expectations on this game as it is developed by one of the leading brands in the industry and regardless if you're Canadian or not, you'll surely find the game incredibly appealing. Above is a no download Dragon Champions free play slot demo which you can play with no registration needed so you can try out the action right away.

Whether the reason for the invasion of the warriors in this Dragon Den is the dragon itself or the massive treasures, it is clear that if you manage to defeat the dragon with the 5-reel gameplay of the game, you'll stand a chance to bring home a fortune. Not to mention, it showcases an unbelievable 4096 ways to win - something that's hardly seen in any slot games today. The game is filled with mountains of gold and treasures and at the center lies the robust reel of the game, holding the dragon symbol, along with the party of warriors from a magician, an archer and of course, two knights as vanguard. There's also the scatter symbol and the wild symbol in the game, which utilizes its special capabilities to bring you an even more exciting reel experience. The wild symbol is just like in any other game as it can switch for other symbols to help you garner a winning combination easier, while the scatter offers load of free spins to boot, which can even reach up to a staggering 100 free spin bonus. The most massive win is of course, offered by the Dragon which is up to 600 coins but although it's a bit on the low side, you'll surely feel that it's more than exceptional as you'll be able to garner frequent wins in this game. Aside from the features mentioned, there's also the impressive Dragonfire effect that can latch on any symbol. With this, a symbol can expand to the four directions and in the free spins round, this dragon fire will always be on the dragon, which will give you more winning chances to celebrate on.

The 3D aesthetic display of the Dragon Story slots from NextGen Gaming, is also something that you'll surely love to play with its enthralling 5-reel and 25-payline structure. It has quirky features and impressive animations to boot, on top of utilizing innovative features that will surely help you get closer to bringing home its massive jackpot prize.

Revel more on what the Dragon Champions Slot Machine has to offer with the Sports Interaction Casino. It comes with heaps of bonuses to exploit, from loyalty exclusive bonuses, topnotch reload bonuses and even a whopping dollar-to-dollar promotion up to $100.