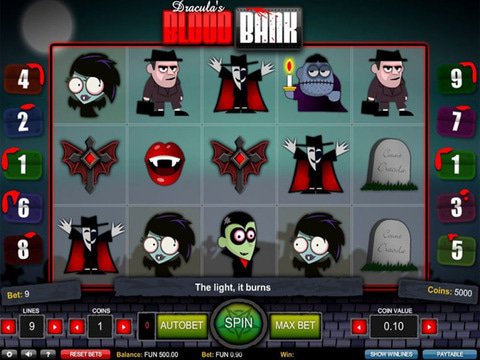 It first brought us spooks on different tales and writings. Then it made its debut on the big screens which truly left a scar on us every night. Now, it's starting to take over our gaming industry to continue its thrilling and scary acts. Count Dracula is set to leave again his own mark on this new game produced by 1x2 software, the Dracula's Blood Bank slot machine. In Dracula's Blood Bank, we are again introduced to this iconic myth character who is known on sipping blood from its victims to continue living. But instead of being terrified, this slot game excites its online and mobile gamers on the number of prizes and bonuses they can get. You can now try this free play slot here with no download required.

This five reel slot is lightly presented with all characters and symbols drawn into fun and cartoon style manners compared to what we're expecting. It has nine unique paylines for you to wager on. You can place wager depending on your preference, but higher stake means higher chances of winning big on the reels.

Just like any other slot machines, your primary goal is to land identical symbols in consecutive reels to win the equivalent payouts. Land at least three of the featured symbols to win different payouts. You can line up five of these in one active payline to win larger prizes.

There is just an exception on some symbols which will only require at least two of its characters on the reels to win. These symbols include the female ghost, the ghoul like Frankenstein, a phantom, and the Dracula himself. Land five of these characters to win big on the reels. The highest paying combination belongs to the Dracula which rewards you with 400x of your total stake.

A special combination of the female ghost, the phantom, and the Dracula in a winning line will pay you 150x of your winnings.

On the other hand, the bat character represents the wild symbol which substitutes to all characters on the screen except for the scatters.

Dracula's Blood Bank slot machine has its scatter symbol which offers you with free spin bonuses. The scatter is represented by the Free Spins symbol which may appear anywhere on the screen to activate the free games.

Three scatters on the reels will grant you five free spins. Four will give you 10 free games, and a maximum of five scatters will reward you with 15 free spins. All these free games will have a 2x multiplier on your winnings.

Other Games with Count Dracula

You can now try the demo version of Dracula's Blood Bank in Stakes Casino with no registration required. All Canadian players are very welcomed to participate with their real money to get exclusive no deposit and free spin bonuses from the slot.