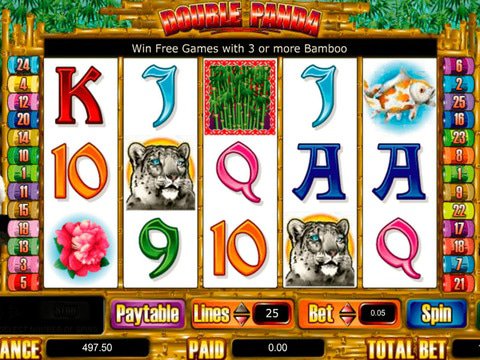 What's better for orient lovers other than a Panda filled game? The answer to that is very simple - a game with two Pandas as the principal character. The Double Panda Slot Machine designed and painstakingly developed by the Amaya Software, will undeniably pique the interest of Canadian gamblers and others who love games that shows the beauty of the orient. In this game, you'll have double the fun with two adorable pandas by your side and even that is just the tip of the iceberg. There's more to discover in the Chinese World of this game and you could find out everything about it through the no download Double Panda free play slot demo placed in this page. No registration is also required which only means that you can indulge on playing the game without the usage of real-money right off the bat. The review below could also serve as a great introduction for you to the game.

Double the Fun with Two Pandas

The addition of another Panda on the screen may seem like a trivial change for some but Double Panda Slot Machine will surely prove to you that it's by no means a worthless step. Even as you enter, you'll surely be able to appreciate the two pandas adorably hugging the reels at opposite sides. The world of this game is also filled with bamboos which makes it evident that the pandas is definitely having a great time. Even the reels they are hugging are made from bamboo refined to provide a complementing and robust look to the slot. The reels at the center contains about five columns while also boasting about 25 paylines for you to bet on. This bet lines are adjustable along with the amount of bet per line, making it an extremely comprehensive quality that allows players to comfortably play the game. The most common symbols you'll find on the list are card icons from 9 to Ace, but there are also ample amount of higher-valued icons. In the bamboo forest of the two pandas, you'll see beautiful blooms of flower, carps, raccoons and even a white tiger. Though these creatures also seem valuable especially the white tiger, it still pales in comparison with the value of the Panda with its 10000-coin prize with its Wild Substitution capability. The bamboo-ridden symbol is also a special bonus symbol, providing a chance to garner free spins to enjoy.

Extreme orient lovers may see the Panda as the gilded creature of their dreams and with that, there are other panda games aside from Double Panda slot machine that's bound to entice you. There's also the Wild Panda slot, a highly-rated, compelling game from Aristocrat. It takes pride on its 5-reel and 100-payline gameplay that presents endless amount of opportunities to win. It also features whopping symbols that will aid you on your orient conquest but bear in mind however, that its jackpot could only tick at mere $2000.

If you want to get more from the Double Panda Slot Machine than you'd expect, we recommend playing it at Cresus Casino. You'll be able to maximize gaming with its promotions from 100% match-up to $150 and 20 free spins bonus. There are also massive loyalty programs and VIP programs to utilize, showing that it's a very generous site.