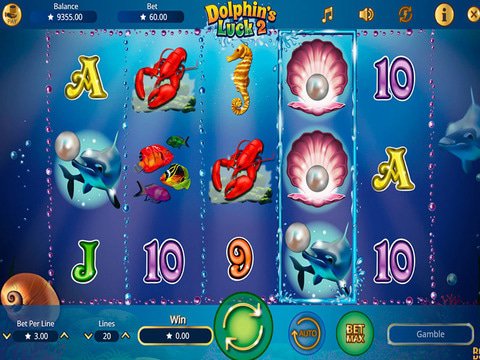 Dolphins, since time immemorial, have been one of the more mystical inhabitants of the sea. Though they may not be one of the most secretive oceanic creatures like the deep sea inhabitants, they are still well-known for their intelligence. However, more than intelligence, there are also those who believe that these creatures are luckier than others, making them a great subject to include in the waging industry to tempt those who are craving to be led on unsurmountable piles of treasures. The Booming Games Software's Dolphin's Luck Slot Machine focuses on these divine creatures as it will take you below sea level in a tropical island where the sun shines brightly and other creatures loom. Through the Dolphin's Luck free play slot demo embedded on this page, you could give the game a try and learn more about it before partaking on it with real money, all with no registration and no download required.

The game is truly pure in showing off the beauty of the ocean itself and of course, its rewarding nature also comes from the ocean with no sunken ships or lost treasures involved. You may find this unbelievable at first but the moment you plunge into the waters of this game, you'll see that its 5-reel and 20-payline gameplay would surely live up to its reputation. The game comes with a pristine blue background that definitely looks like the underwater environment, filled with seaweeds, rocks, shells, corals and even occasional bubble animations that allows the game to emit a more realistic and immersive appeal. The controls of the game are simple but intuitive in every ways. Bet could go as high as 60 coins per spin while you'll also have choices for auto-spin, max bet and more. The low-paying symbols of the game are enacted by the card icons while other game-related symbols will surely take your breath away. There are angel fish, school of fishes, lobster, a clam with pearl, the dolphin catching the pearl and a riveting seahorse. The dolphin may not be the highest-paying symbol of the game, but it comes with a special scatter capability that allows it to pay anywhere it lands along with the capability to award players with luscious free spins. The wilds of the game on the other hand, is the seahorse that's equipped with a substituting capability paired up with the outstanding 60,000-coin jackpot of the game.

With the mystical and curious creatures known as the Dolphins, it is no surprise that Dolphin's Luck Slot Machine isn't the only game made with it as the subject. There's also the Dolphin Quest Slot from the prestigious Microgaming, boasting a 5-reel and 50-payline gameplay that's more astonishing as you think. Though its jackpot of $6250 may not be that much enticing for some players, the game comes with a visually compelling gameplay drenched with fabulous features that's bound to give away exquisite experiences to players.

If you aim to win the grand prize of the Dolphin's Luck Slot Machine, we recommend you to give the game a try with real money at Tropezia Palace Casino. This trustworthy and reputable site offers high-end waging experience to players with its VIP club, welcoming promotion of 100% match-up and continuously updated bonuses, making it an irresistible place for anyone.