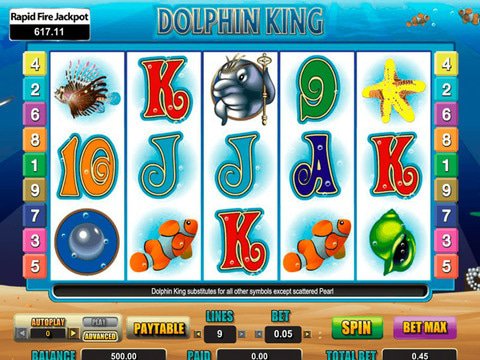 The underwater kingdom is always the perfect abode for unrivaled treasures unbeknownst to the world. Guarding these treasures are not sea gods or fabled mythical creatures as per what's stated in Myths and Legends but rather, by the Dolphin King - at least that is what's behind the concept of the Dolphin King Slot Machine from Amaya Software. This game developed by Amaya, is one of its visually compelling game out of hundreds of its products. It's a game worthy of its title and its theme as you'll be welcomed to a kingdom that's ridden and filled with treasures from left to right - you just need to have the luck to get them. The no download Dolphin King free play slot demo in this page along with the following review, may help you learn more about this game and convince you that it's worth a shot whether you're Canadian or from other countries.

Visiting the Kingdom of the Dolphin King

The game's visually compelling setup may not be the most realistic and innovative however, it holds crispness and a vibrant appeal that will surely lighten up your experience. You're underwater in this environment, but the sunshine piercing through the water illuminates the bottom and allows wagers to witness the grand kingdom of the dolphin. You'll know it's a kingdom as you see the statues of the Dolphin King himself, showing that he's just your regular dolphin fit to become the ruler of its race and not an all-powerful god. It may not be as mythic as legends, the Dolphin King will still grant you mountains of treasures that even Mythical-based games would be hard-pressed to compare with. In this 5-reel and 9-payline game, you'll see card symbols that have adapted in their underwater life, starfish, shells, various fishes and the Dolphin King himself. There's also a silver pearl amidst these creatures, serving as the scatter symbol that's geared up to provide payment wherever it lands on the reels. The Dolphin king exhibits his majestic power with its wild capability of substitution, but his prime powers doesn't stop there. If the King lands on the 1st or 5th reel, 20 free spins will be generously given to the player with rounds that have doubling multipliers. This kind of power shows off the prestigious Dolphin King's power within its domain that certainly can't be belittled.

Dolphins are magnificent creatures that have garnered fame for their intelligence. Other than Dolphin King Slot Machine, the Dolphin Quest is also another slot game based on the Dolphin that you're bound to enjoy. It's developed by Microgaming with a 5-reel and 50-payline gameplay with graphics that surpasses the Dolphin King. There's a lot of special features in this game as well while a whopping jackpot of 150,000 coins awaits the chosen one of the sea.

In the long run of pursuing the top prize in Dolphin King Slot Machine, it could all turn out into a battle of attrition where the number of spin you'll make exceeds your imagination. However, with the help of Cresus Casino, that wouldn't be something you'd have to worry of. In this site, you'll have bountiful promotions from the welcoming package to overwhelming programs, while hundreds of games are available via its powerful multi-software system.