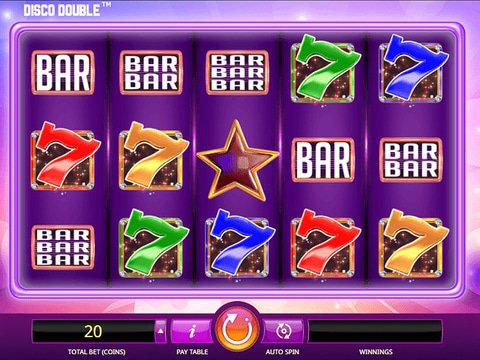 Dance to the rhythm of the Disco Double slot machine. Players may enjoy the party in this game because of its entertaining backdrop. The design of the game will surely make the players feel that they are inside a disco partying all night. To review the game, players may access the free demo version of the game on this page with no download needed.

The disco-themed game is developed by the iSoftBet software. Great minds behind this game featured an explicit graphic designs that many players will surely adore. The background music of the game will instantly bring out the inner dancer of every player.

There are five (5) reels on the screen and these reels all show icons such as different colors of number 7, star, and bars. Symbols of the game seem to be partying too. Players simply need to match similar icons on a single pay line to win some cash. A paytable is available to see the corresponding amount of prize of each symbol.

Aside from the regular payouts from matching similar icons, the Disco Double slot machine has special symbols for players. These icons can add some cash to the player's bank roll. One of the special icons is the wild symbol. The icon is quite straightforward as it only has a word wild written on it. The dancing wild icon can act as a substitute for all other icons on the reels except for the scatter. Other symbols are replaced by the wild icon in order to make a winning pattern of symbols.

The logo of the game serves as the scatter icon. Hitting at least three logos can trigger free spins. The Disco Double slot machine can yield up to 10 free spins. Without a doubt, this feature can add some spice to the game and to the cash prize of the player.

Another special icon to look after is the mirror ball multipliers. This special one will only appear during the free spins. When it shows at the third reel, any current winning from the free spin will be doubled. Lucky players can even get up to 10,000 coins just from the free spins only.

Playtech has a game similar to the Disco Double. The Dirty Dancing slot machine, is also a dance-themed game with a pink to purple background. The game has a glamorous ambiance because of its sparkling symbols. Graphics of this game is much better compared to the symbols used in the Disco Double. Still, both games have their own unique pros and cons.

Sports Interaction Casino will let you dance on its Disco Double free play slot. It asks no registration so players can enjoy at ease without any fear. Free spins and bonus awaits the players of the said gaming site. Canadian players may also opt for this casino if they are looking for a mobile friendly gaming site.