Diamonds on Fire
Enjoyed playing this game?
Rate it → 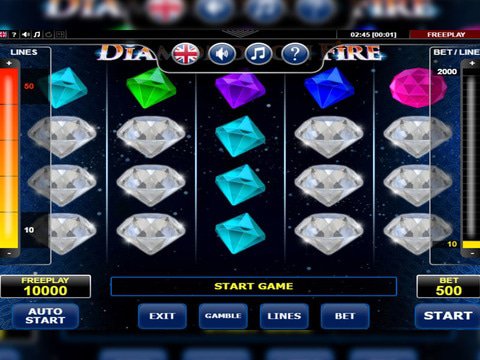 Games with superior innovative features and unmatchable complexities may seem like the norm today, but what wagers would surely appreciate more than this are those games that encompasses the idea of providing straightforward gambling atmosphere devoid of cheesy or witty back stories. The game developed by Amatic Software, the Diamonds on Fire Slot machine fits that description perfectly and it even provides a bit of a nudge of inspiration for players by providing a theme that would truly make one's eyes heat up in greed and wanting. Whether its players from North America like Canada, Europe or even Asia, the game has truly pushed beyond the boundaries of classic games and pulled a fast one on its competition. The Diamonds on Fire free play slot demo here will allow you to review the game without anything to worry about as it comes with no registration and no download requirement.

Get Wealthy with Divinely Precious Gems

The game induces quite a blood-boiling experience despite its simplicity in terms of background and anything else. The game's audio is somewhat techno while the backdrop comes in a space like environment with sparkles that accentuates the diamonds on the reels. The reels come in a transparent backdrop as well making the overall background the main backdrop you'll be able to see. Below the reels is a superior command system that will allow you to freely and easily control the 5-reel and 50-payline structure of the game while there's also the gamble feature and the increasing of bet levels, to make sure that the game is fit to be played by all forms of rollers. Looking at the gems in a more in-depth fashion, it is apparent that there's a lot of differently-colored gems in the game. from green, blue, violet, orange, pink, gold and even the silver diamond, there are also more special symbols like the red diamond that's literally on fire and the star symbol. The Star comes with an astronomical 125000-coin jackpot while the red heart gem is a wild that could give you aid in completing stunning combinations. Without a doubt, the game's straightforward behavior along with its rewarding qualities makes it a game you'd more than love to spend money and time for.

Though the Diamond Dragon developed by Rival Gaming does have diamond in its core, it's merely the treasure coveted in the game amidst the raging war of historical proportions occurring against Dragons. Comparatively, it is a bit more invigorating and innovative than the Diamonds on Fire Slot Machine, and it also utilizes helpful symbols on its 5-reel and 50-payline matrix. The game is also known for its mobile availability, making it truly irresistible for those who are looking for games they could play anywhere.

As a wager, if you'll be able to play more on the reels without spending a ridiculous amount of money, then there's no doubt that you'll flock to wherever that kind of setup is being offered. Fortunately, we have your back as we suggest going to Mars Casino to receive benefits beyond your imagination. In this site, you'll have extra $400 if you maximize the 100% match-up of the game. You will also have fun playing more with 50 free spins bonus and reload bonuses up your sleeve.