Dawn of the Dinosaurs

Dawn of the Dinosaurs
Enjoyed playing this game?
Rate it → 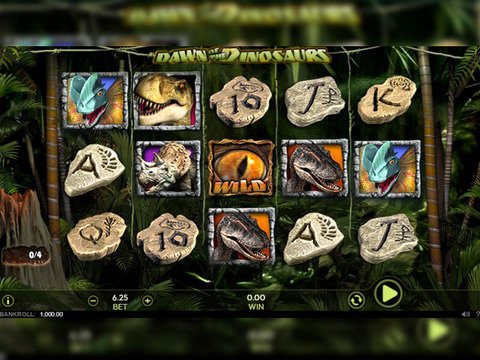 Dawn of the Dinosaurs

Dawn of the Dinosaurs Game Review

Let us travel back in time where dinosaurs, lava rocks, and slabs of rocks exist on this new game installment from 888 holdings software. In Dawn of the Dinosaurs slot machine, you are given the chance to go back into prehistoric times where these beasts exist in vast rainforests and fields. Learn to connect yourself to these large reptiles as they may help you on your way up to the reels to win exciting rewards and bonuses from this slot machine. You may now try this free play slot on this site with no download required.

Dawn of the Dinosaurs Game Review

This five reel slot game has 25 unique paylines for its online and mobile players. You can place wagers for as low as 0.05 coins up to 5 credits per spin. If you want to win big on the reels, then you should cap off every spin with the maximum wager available. This slot also has a progressive jackpot which truly entices its players.

You need to land combinations of the related characters and symbols on the reels to win different winnings and rewards. The stone slabs with the playing card symbols on them pay the lowest payouts ranging from 30 up to 100 credits per line. The Dilophosaurus, which has very distinct gills on the side of its head, pays you with 200 coins. The Raptor - which has a thick, gray skin - rewards you with 300 coins.

The Triceratops which has a large horn in front of its head pays 400 credits, while the T-Rex which has dark-green skin grants you 1,500 credits of your total stake.

The orange eye represents the wild symbol on the reels. It substitutes to any character on the reels - except for the scatter and bonus symbols - to complete a winning line.

You can also earn bonus free spins through the special scatter symbol represented by the lava characters. Just collect four lava symbols to activate this free spin bonus. You can choose if you want to have 12 free games or 6 free games which have a 2x multiplier on all winnings.

There is also a special Raptor Clash bonus game which is triggered when three or more bonus symbols appear anywhere on the reels. During this mini-game feature, you get to control one of the raptors for three rounds on the screen to accumulate rewards and prizes.

Lastly, there is an egg collection feature wherein you get to collect T-Rex eggs as you progress on the reels. The collected eggs will remain afloat at the bottom of the game screen which can be used to replace other characters on the reels to complete a winning combination.

If you can't get enough of the nostalgia these prehistoric animals bring to you, then you must try Genesis' Dinosaur Adventure slot machine. Dinosaur Adventure is a five reel slot machine game which has 40 paylines you can wager on. You can place wagers for as low as 40 up to 200 coins and win up to 800x your total stake.

You can now try Dawn of the Dinosaurs' demo version in 888 Casino with no registration requirement. Canadian players are also welcomed to play with real money wagers to get free spin and no deposit bonuses.