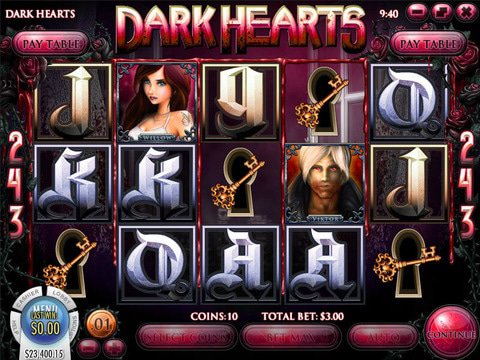 In the book of wagers, concepts that would engulf them with their mysterious vibe are always welcome in their book and there's no doubt that you would also give the go signal when you encounter what the Dark Hearts Slot Machine could provide you with. This game is a product from the highly renowned and outstanding brand of Rival Gaming Software, and from this point alone, you'll surely have a bright idea of how great its offers could possibly be. Filled with a mysterious and dark vibe that will surely get you more and more excited in playing the game, there's little to no doubt as to how this game managed to become highly renowned even in the hearts of Canadian gamblers. Gain more experience as to how the game works and see it for yourself with the no download Dark Hearts free play slot demo with no registration needed provided in this page.

Some may think that the dark vibe of the game comes from its gothic appeal but when you look closer as to what the game really offers, then there's no doubt that you'll sooner or later be enlightened as to what you'll really face on the reels - Vampires. Vampires loom the theme of this game, providing an even darker and more mysterious concept that may have been used before but would always be something that any player would find very intriguing to play with. However, if you think that it would be like some olden vampire story with all the mob, torches and forks, then think again as this one is something that's infused with a bit of romance and a valiant goal in mind. This highly rewarding 5-reel game with 243 paylines to provide you with lots of chances to win, involves two valiant vampires, in a quest to vie for the one they both love named Willow. The two vampires, Markus and Victor may be focused on competing for Willow but the mortal is of course, on the path to put the two to eternal rest. Who would win? Regardless of what the ending would be, spinning the reels of this game could potentially bring you towering rewards beyond your imagination. Symbols in the game range from card symbols, chalice, crucifix, Rose, dark heart and more while the Key in the game acts as the scatter, which even unlocks the bonus portion of the game which would push you to pick sides out of the three characters with corresponding rewards to boot. Though dark and extremely mysterious, it is clear that the game is something that any wager would grow fond of and love.

Switch your gears by playing another vampire game with a 3D twist - the Vampire feast Slot Machine from SkillonNet. It has impeccable graphics portraying the classic Dracula with all the details that goes with it on top of a steaming winning potential up to $100,000 up for grabs.

There's no better place to play the Dark hearts Slot Machine other than in our suggested site, the Slots Million Casino. Considered to be one of the best casinos in the online world, you'll surely be satisfied in this site from its promotions, customer support, banking options, intuitive interface and towering amount of games.