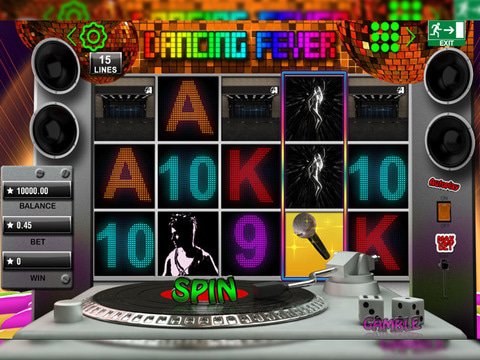 The difference between the previous and the new generations are truly worlds apart from each other. Despite the two also experiencing fun sleepless nights, the latter does it with the help of technology and the comfort of their own bed. The former? They party all night, especially during the 1980s where clubs and partying were at their peak. In the Dancing Fever Slot Machine, you'll be able to dance to the groove and experience its powerful and potentially rewarding gameplay that will surely bring you one of the most spectacular gaming experience of your life. The game is developed by Booming Games Software, a relatively new developer on the gambling scene that's obviously vying for the top as well. With the no download Dancing Fever free play slot demo, you could enjoy the game with no registration needed through this page as well as learn more about it with no expense.

Who said oldies don't know how to party? That's entirely wrong because in fact, it is during the 20th century where this kind of activities are at their peak and prime. As you enter the game, there's a colorful dancefloor of cubes that brings up a flamboyant atmosphere to the scene while you're facing a DJ Set, two big speakers with the reel screens at the center. At the top, you'll see the title but below it, there's a giant disco ball that's ready to party it out. The game runs with 5-reel and 15-payline structure coupled with a betting range up to 45 coins. Before you spin, you'll hear murmuring sounds along the crowd, making it apparent that plenty of people are in the party. When you spin, an animation and audio is triggered especially when you get a winning combination. In the game, the scintillating lights and audio aren't the only seal-dealer, there's also a plethora of symbols in the reels that's bound to keep you excited for more action. There are simple card icons, disco ball, garage, a dramatic silhouette of a man, microphone, New York silhouette and the dancing man silhouette symbol. Microphone is the scatter of the game, giving a 5x 6.75 payout and could certainly bring you free spins when you get three or more of it on the reels. The Wilds of the game is the dancing man, capable of rendering you with a fruitful 5x600 jackpot of the game. Though there's not that much surprising features on the game, its jackpot and overall gameplay is enough to convince anyone to give its reels a spin.

Old school party would surely be fun as portrayed by the Dancing Fever Slot Machine, but there are also those who'd prefer something subtle but invigorating. A night out slot from Playtech would allow you to enjoy unadulterated fun on the reels, with its 5-reel and 20-payline matrix which brings massive 100,000-coin jackpot prize to the front plate.

We suggest that you dance and spin with the Dancing Fever Slot Machine with the advantages served by Tropezia Palace Casino. Despite its unavailability for mobile and download versions, leaving it with a flash version, the game still offers lucrative promotions that are regularly update, exclusive VIP promotions and a stunning welcome package containing 100% match-up deposit promotion maxing out to $100 deposit.