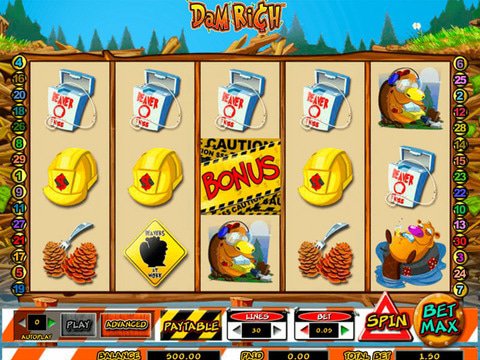 Despite Amaya Software being relatively new in the market, the fact that it is part of the NYX group is testament enough that they excel at what they do. They've managed to transform themes after themes into timeless products and their recently developed Dam Rich Slot Machine is no different from their other successes. Still, there are lots of differences in terms of features and alike that you'll certainly love about this game. The name of the game says it all and if you're feeling hesitant if a Dam could really give you the riches that you seek, feel free to play the no download Dam Rich free play slot demo provided in this page. Canadian Gamblers have already been convinced by this game and with no registration required you could revel right away in its magnificence even without real-money involvement.

Discovering Treasures in a Dam

If you're thinking about huge clunks of metals known as the Dam made of humans, go straight to the game right away to clear your mind of misunderstandings. The game provides a product of nature - a dam built by perky and exuberant beavers which are practically the workers of this game. The dam they have built could be seen at the backdrop and there's no doubt you'll agree that they've done more than a magnificent job. There's also a funny little touch in the visual graphics of the game which involves the funny beaver mascot of the game, wondering on top of the reels itself. The reels placed at the center is directly above the controls of the game which is designed for caution that the dam is under construction. While it is ensured that you won't be disturbed it is time for you to amass and acquire treasure from the dam just by spotting diverse symbols. There are hammer and nails, saw, pinecones, helmet, beaver emergency kits, blueprints, signs, working and relaxing beavers, and the game symbol. The game symbol boasts 1000 coins if you get 5 of them, but there are also other noteworthy symbols that could grant you more benefits than you could imagine. There's the scatter symbol bonus that could grant free spins and pay wherever it lands on the reels while the Wild Symbol can help complete winning combinations. There's also a random expanding wild which could enormously help you in conquering the game.

With Dam Rich Slot Machine, you'll be able to have a glimpse of just how hard beavers work all while gaining opportunity to win massive prizes. This is also what you could experience in Builder Beaver as it provides a similar theme with little bit of differences. It is a 5-reel and 25-payline game under the shelf of RTG while also providing useful features and symbols that will help you reach the top which you aim for.

More than symbols and features, choosing the right site to play Dam Rich Slot Machine could do wonders for your overall gameplay. We commend players to give it a try at Cresus Casino to experience benefits beyond belief. You'll be warmly welcomed with a hundred percent match-up to $150 along with 20 free spins to spend. There's also superior security and banking options here, while a multi-software system assures you'll have all the games you could play.