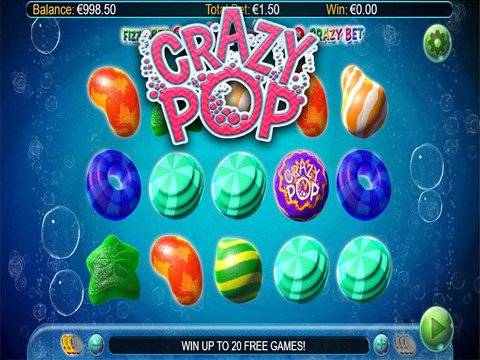 Take a plunge into this new and fun-filled watery slot machine developed by NYX software. In Crazy Pop slot machine, you get to enjoy a game full of cute, playful, and bubbly icons as you try to hit winning combinations on the reels. No need for long drives just to hit the beach this summer as you can now be part of this hot, online craze in this free play slot game with no download required.

This five reel slots, sometime with six reel, has 50 stable paylines for its online and mobile players to wager on. You can place your wager for as low as 0.01 coins up to a maximum stake worth 0.25 credits. This allows you to play with 12.50 coins per spin at most.

As mentioned above, you may opt to play with either five reels or six reels. Whenever you're playing with the six-reel feature, the last reel will be multipliers which will apply on your winning lines. You may choose between the Fizzy 6th Reel and Crazy 6th Reel features, which will require you with an additional wager or double the played stake respectively.

Crazy Pop will surely satisfy your sweet tooth and might get you into sugar rush once you land different combinations on the reels of its sugary reel symbols. These include the delightful sweets - formed after fruits and shapes - which reward you from 80 up to 300 credits. The donut-shaped candy also pays you with 300; whereas the highest paying treats are the heart and lollipop shaped candies with 500.

There is also a wild symbol which only appears on the third reel. It replaces all characters including the scatter symbol. All completed combinations with the wild symbol on it will get a 3x multiplier on the total amount of winnings on that round.

Aside from these regular winnings from the reels, you can also get exclusive bonuses and in-game features from the scatters. The scatter symbol is represented by the Crazy Pop logo. When three or more of the scatters line-up in one line, you get the chance to activate one of the three features of Crazy Pop.

The Super Sweet Feature rewards you with 20 free spins. During these free games, nine Extra Wilds will appear after every spin. These Extra Wilds replace any character on the reels except for the scatter symbol itself.

There is also a Slide Feature wherein you get 9 free spins. Whenever the wild character appears, it will instantly duplicate into 1 or 2 other reels for better chances in completing combinations. Lastly, the Wild Feature will give you 7 free spins with the wild character fully occupying the third reel during these free games.

All these features can be retriggered as long as the scatters appear again in 3s or more.

If you are looking for other sweet treats on the reels, then you must try Merkur Gaming's Candy & Fruits slot machine. In Candy & Fruits, you can play with 10 fixed paylines in this five-reel slot in which you can start wagering for as low as 0.01 credits.

You can now try Crazy Pop's demo version gameplay in Slots Million Casino with no registration requirement. Canadian players can also experience it with no deposit and free spin bonuses.