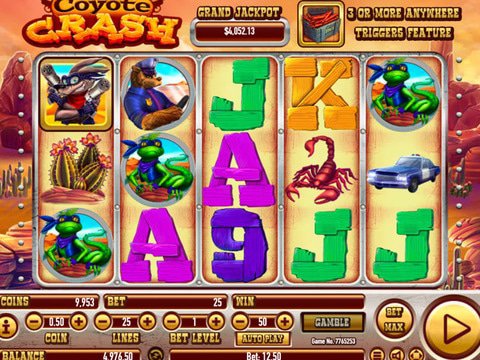 Habanero takes yet another extravagant twist and risk in one of the most-used category and theme in the slots industry through their Coyote Crash Slots Machine. This game will send you back to the times of the Wild West where towns are ravaged by bandits, thieves and more and it's up to the sheriffs to save the day. In this game, can you get your hands on some unbelievable merits, rewards and treasures? Play the Coyote Crash Free Slot Play Demo available in this page and see what the incredible twist the Habanero has managed to imbue on this epic adventure game. See for yourself why Canadians got deeply captured by this game, how it earned numerous up reviews and have nothing to worry about as this demo game require no registration and no download. You could get down to action right away.

The first noticeable, amazing aspect of this epic game is its visually appealing and mesmerizing graphics that screams everything about the Wild, Wild West. The game itself is placed in the middle of the desert with the reels at the center of attention and the controls below it. The reels itself complements the background perfectly, just as how the audio melds everything together as well. The symbols are pretty simple and are also imbued with the essence of the West. Even the common card symbols that have the lowest prize possible comes with an epic lettering design that makes it appear like wood which is a perfect fusion with the theme. The rarer symbols on the other hand, which are related to the theme just like the car, truck, robber, cactus and skull, will be able to grant lucky ones with massive treasures of up to 5,000 coins. The twist of the game as well is the fact that instead of people, actual animals embodies the characters of the game, making it even more interesting. You also wouldn't need to worry about taking risks as you can completely control your destiny with the game's intuitive interface. Of course, the wilds and scatters of the symbols which are the Coyote and the Loot symbol, respectively, also plays a huge role in granting you to victorious ending you desire.

You can never have too many Wild West games and even though the Coyote Crash Slots Machine is already impressive, you'll still surely be dying to play another Wild West themed game in which case, you should try the Black Gold Slots developed by Betsoft. It has a simpler matrix with 3 reels and 30 paylines, but this seemingly simple setup comes with a 10,000 coin jackpot that exceeds the prize set by the Coyote Crash. Both games however, possess top qualities in their own respect, which makes it apparent that both will surely be worth playing.

Enjoy the amazing experience of the Coyote Crash Slot Machine in the prestigious establishment of the Club Gold. This casino is highly revered and you can play it easily through download or even flash-enabled browsers. You may notice that it's lacking delectable promotions like free spins bonus and no deposit bonus, but does have a superb and stellar match-up bonus that'll give you a dollar-for-dollar bonus up to a staggering deposit of $2250.