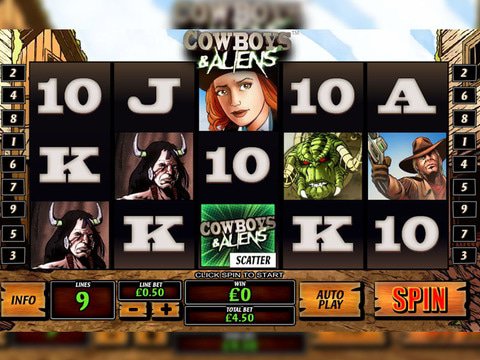 Alien hunting inspired games are considered as one of the famous genres in the virtual gaming community because of its impressive graphic display, exciting storylines, and immersive bonus features. Just like in Cowboys & Aliens slot machine where you get to enjoy the fun on playing the reels and the thrill of battling alien creatures to win cash prizes. To know more on this game, you can now play Cowboys & Aliens free play slot here with no download required.

This game developed by Playtech software has 5 reels and 9 fixed paylines for its online and mobile players. You can place wagers from at least 0.01 credits up to 100 credits on your desired lines.

There are different in-game symbols on the reels which reward you with different payouts depending on the combination matches. These include character like chaplains, spaceships, aliens, and cowboys. There are also bonus symbols which trigger special in-game features which will be explained later.

Its wild symbol is represented by the spaceship icon. When this symbol appears on the reels, it will automatically replace any basic symbol to form a winning combination. If five spaceship icons align on an active payline, it rewards you with a whopping 10,000 multiplier for your wager.

As mentioned awhile ago, there are bonus symbols on the reels which trigger special in-game features of Cowboys & Aliens slot machine. These symbols include the Alien Attack bonus, Cowboys & Aliens scatters, and the Alien gun icon. These bonus features have different mechanics which reward you more cash prizes and free spins.

The Alien Attack bonus game is activated when these bonus symbols appear on the first and fifth reels. This will transfer you into another game screen where you will battle three waves of alien attacks. You will control three characters in this mini game "" Verity, Zeke, and an Indian Warrior. These characters have different ammo restrictions and accuracy levels. Every alien kill rewards you with a 2 times multiplier, different amounts of cash prizes, or extra ammunition.

This bonus round ends when all characters run out of ammo, or all waves are completed. If you exterminate all alien creatures in this mini game, you are rewarded with additional cash prizes. Leftover ammunition also gives you extra rewards.

Meanwhile, the Cowboys & Aliens scatters activate the Free Games feature of the slot game. If three or more scatter symbols appear on the reels, you will be rewarded with 8 bonus spins and comic strip wild symbols.

Lastly, if the Alien gun icon falls on the first reel, it will activate the Alien Weapon feature of the game. During this segment, the triangle found on the gun spins and randomly picks a number from one to four. This determines the number of random symbols fired on the reels which will then act as extra wilds on the grid.

If you are looking for other alien-based online games, you may try famous slot machine title like Aliens Attack. This game also provides its players with impressive gameplay graphics and exciting rewards.

With no registration needed, you can now play Cowboys & Aliens demo version at Slots Heaven Casino. They also allow Canadian players to participate with free spins and no deposit bonus.