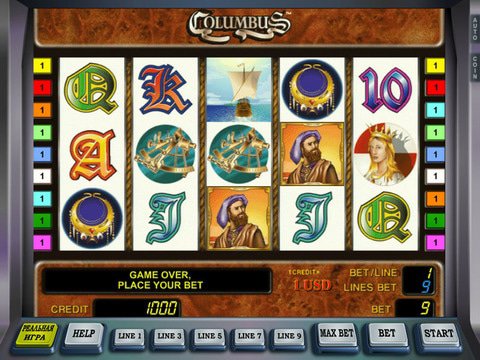 Meet the famous Christopher Columbus and have a glimpse of his contribution to the discovery of America. This Italian voyager has been an inspiration not just in his continent, but also in the gaming world. A game entitled Columbus slot machine is created following his name to honor his work. Experience how to live with a mighty explorer by playing the Columbus free demo game on this page with no download required.

Novomatic software has paved its way to recognize one of the most important persons from the history of America by developing this game. This version is the original one because after the successful release, the same software launched the Columbus Deluxe slot machine. These two are almost similar except for the number of pay lines and possible wager available. Other than that, the classic and the deluxe share the same pride of featuring the Italian explorer.

The interface of this five-reel game showcases how well-travelled our character is. On top of the screen there is a navigational map, while the background of the reels display an image of sunset over the calming sea.

Icons of the reels are comprised by the usual playing card symbols from 9 through Ace, gold necklace, sextant, ship, and Queen Isabella. Of course, the game would not be complete without an image of Columbus as a symbol. The game has a total of 9 pay lines where you can place 0.02 up to 5 coins on each line.

To guide you in navigating the sea, there are three scatter ships namely Nina, Pinta, and Santa Maria. When they appear on the first, third, and fifth reels at the same time, you will unfold free games. The best thing about this game is that you can also retrigger the bonuses as long as you continuously get the three scatter symbols on the said reel positions.

Explorers on the Sea

Like what Christopher Columbus did, some pirates are also exploring the vast sea to find something to discover. Might as well join them as they search for new discoveries in WMS's Pirate Ship slot machine. It allows you to wager on up to 20 pay lines per spin. This game has higher number of betting lines compared to Columbus game. You can also get free spins from these two games.

If you are ready to accompany Columbus, head over to the Cashpot Casino. Canadian players will surely enjoy the Columbus free play slot on this gaming site. You can even start playing with no registration asked.

The game is accessible using either your desktop machine or your mobile devices. The mobile version of Columbus game is as entertaining as the desktop version.