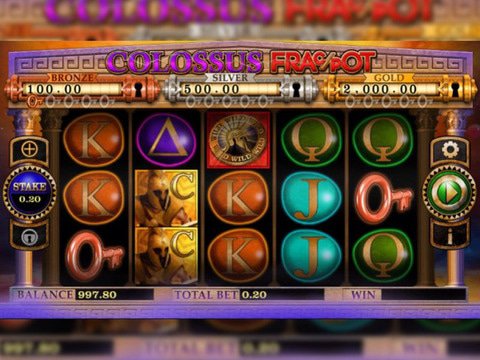 Ancient Civilizations may have risen and fallen throughout the ages but some things just remains the same especially when it comes to prestige and reputation built through time. The Ancient Greek Empire proves its legacy to be eternal as nowadays, some of its structures remained revered not only by its people but also those coming from all the corners of the world. Core Gaming Software celebrates the ultimate age of the Greek Empire as it exhibits it on the visually-compelling slot game known as the Colossus Fracpot Slot Machine. The first part of its name gives it a valiant and glorious aura but the Fracpot portion just leaves its adorers in confusion and in thought. If you're just like the majority of users who can't keep wondering what its name suggest, then why not plunge yourself into the game and travel back to the age of this game through the no registration and no download Colossus Fracpot free play slot demo.

Onwards a Battle for Gold and Glory

Even when the Ancient Greek Empire has been incorporated on the reels, the valiant spirit of its people remains unperturbed and strong as it can even pass down its superior riches and glory to those whose fate dictates it. The Core Gaming Software has truly done a great job in terms of the graphical department of the game and though it may not dare say it's on top of the games in its visuals alone, it will still hold its head up high with the help of its features and rewarding nature. The sky and land on the game emanates a truly archaic feel while the columns of the structure housing the reels permeates an aura as if it has been ravaged by time. The symbols on the 5-reel and 20-payline matrix of the game all comes with solid graphics from simple card icons, helmet and swords, a glorious warrior, wild icons and keys. The wilds of the game come with a 5000-coin jackpot but that's not all there is to the game. The game comes with three different grand jackpot prizes, unlocked by keys corresponding to them. You have to get 5 of these keys to open the jackpot contained within, but getting two to four would give you a fractional jackpot. This is one of the key features of the game, showing its benevolence and the obvious existence of lucky opportunities in the game that will surely set anyone's spirit afire.

You'll surely find the Legends of Greece Slots from Saucify Software as it basically runs under the same genre as the Colossus Fracpot Slot Machine. The same building is erected as the frame for the reels of the game, but with a lighter breath to its 5-reel and 20-payline gameplay. The game provides a decent 100x payout with its superb graphics, but it just can't match the exceedingly rewarding opportunity presented by the Fracpot.

The Core Gaming Software may be newly established but it has already become one of the leading HTML game developer today, promising great, flexible games. We recommend you to play the Colossus Fracpot Slot Machine through William Hill Casino. It accepts Canadian players freely, is available on all platforms from mobile, flash or download, and it has plethora of bonuses to exploit.