Coin of Gods
Enjoyed playing this game?
Rate it → 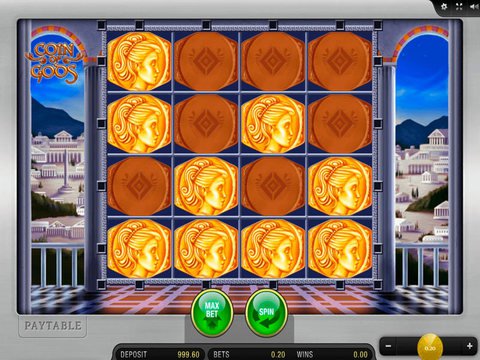 The ancient gods and goddesses of Greece is a favorite theme for online casinos, and Coin of Gods slot machine from Merkur Gaming is no exception. You can match wits with the gods and pit your skills against the most powerful beings in ancient mythology. You can play the demo on LVBet Casino. You can play Coin of Gods on the top Canadian website, which also lists down hundreds of other titles from the best software developers in the world. Awaiting you if you do sign up with the website is about $1,000 no deposit bonus, which you can avail under certain conditions. Again, you can browse the website, play some of the games until you decide on some titles you feel is perfect for you. There's no stake on your part, no commitment and certainly no investment at the outset.

This one has just four reels and 10 pay lines, and with no progressive jackpot, this may be considered too simple to some veteran slot punters. But it has its own rewards as some players have, and will have, found out.

The gameplay is quite simple. You can choose from $0.01 up to $1 per line. This game has 10 pay lines. What you want to see on the reels is a lot of gold coins (hence Coin of Gods). To simplify: the more coins, the higher the payout. For instance, you can get as much as $10,000 on a single spin.

If you are tired of manually spinning and yet still could not add to your account, you can click on the autoplay to let the machine spin for you. Maybe this will turn around your luck. There are some free spins hidden within the game.

Again, Coins of Gods features no progressive jackpots. But the coins just roll out quickly enough. For instance, three lines of the gold coins will pay you $100, five lines will give you $600 and 10 lines will win you $10,000, which is the maximum money you can get out of this game.

Because this is simple, those who are hardcore slot machine players won't probably touch this game with a ten-foot pole. But if you are new to the game, this could serve as your introduction to the world of slot.

The stakes are high in this game, so be forewarned. The odds are stacked against you and the gods are sore losers. You will really have to be careful about your strategy--and a lot of luck will help as well--in order to walk away with a lot of money.

If you like gods and goddesses and ancient mythology, you will really like Zeus from WMS. This one is a no download, no registration game so you can play right away. You can also try its many features by playing the demo. That will give you the advantages of learning the game without really messing up your budget.