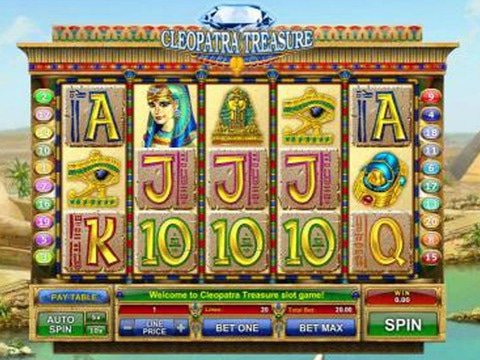 Go to the Egyptian themed section of the slot industry and there's no doubt that you'd find games out there like mushrooms on the forest. The number of games in this theme can't be underestimated the least bit because when you think that you already know them all, they keep spawning relentlessly and multiplying each week, month or even days. Games OS Software is well aware of this but with the hype of this kind of games and its undoubted attractiveness, they have still developed the Cleopatra Treasure to join the bandwagon and get a hold of their own share of dedicated users. What more could get the adventuristic spirit of wagers, other than an Indiana Jolie experience across deserts and tombs to find treasures, right? Experience it all on this game that's highly loved by Canadian gamblers through the no registration and no download Cleopatra Treasure free play slot demo here.

Tiring as it may be to scour the depths of various tombs and vaults of treasures left behind by the powerful rulers of Egypt, you still won't be able to stop the urge of going through it with the temptation of vast amount of wealth on the end of the line. Cleopatra Treasure from Games OS Software proves to be the same as it will surely bring enough temptations to the plate to get you to spin its 5-reel and 20-payline matrix even more. The background of the game is chock-full of sands and everything loved in Egypt. There's the gigantic Sphynx, Pyramid, a crystal-clear river and verdant oasis encompassed by the clear skies. At the center lies one of many treasure troves of Cleopatra, standing firmly on an Egyptian structure that seamlessly blends with the game. The controls of the game is something you're already familiar with the brand with a max bet of 60 coins per spin. In the reels, you'll find golden card icons, golden sphynx, golden eye of Horus, Anubis, a gold vase, gold scarab and a gold statue of Cleopatra. Everything around this tomb is Gold, giving you plenty of treasures to appreciate. The Sphynx is the most lucrative of them all with the 3000x jackpot, but you'll find it hard to win without the help of the wilds scarab symbol built with substituting capability, There's also Cleopatra as the scatter of the game for delectable free spins and the golden vase that acts as the key for you to enter the illustrious bonus game.

When it comes to Egyptian games, Cleopatra Treasure from Games OS Software isn't the only one with its title. There's also the similarly titled game on Isoftbet, but with a simpler setup of 5 reels and 5 paylines. Even the graphics of the game is simpler, but still possesses quite detailed symbols. Unfortunately, the game pales in comparison in terms of jackpot, but it still remains to be a great place to have fun.

Reassure yourself that you're playing at the best condition by following our recommendation and playing the Cleopatra Treasure Slot Machine on 888 Casino. By doing this, you'll have more dough to spend with its $88 no deposits bonus, over 10 free spins to boot and a dollar-for-dollar match-up to $200 for your initial bonus.