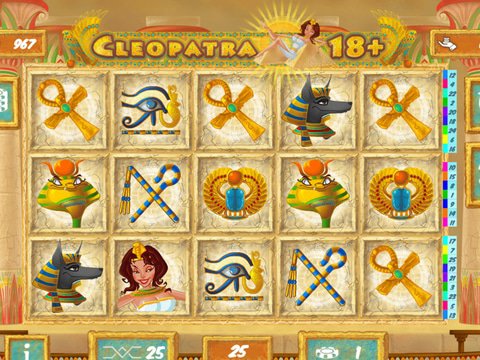 This is one of the most common video slots across all online casinos, been developed by the IGT international software company, it is based on an ancient Egyptian theme and was first established in 2006. Its symbols are all based on the ancient Egypt, even though it is not a progressive jackpot slot game, it holds one of the largest jackpot prizes in the world of non- progressive online slot games, there are also amazing bonus features, which make the gaming experience worthwhile. Its background, is similar to other Egyptian slot games, however it has a very unique style, and an amazing gameplay feature. There are plenty of free spins, and lots of scattered plays, found all over with variety of high value paying symbols, with it been the most profitable of the Egyptian themed slot games, most of the online casino players opt for it. If you would like to play free MrSlotty games, we got you at grizzly gambling.

Cleopatra 18+ is a 5 reels and 20 payline slot game, players are open to bet on as little as 0.02euros, for every payline, and as much as 10euros, thus players are open to wager a maximum of 200euros for every spin. The highest paying symbols in the game are; the eye of Ra, the flail and the crook, the most of the valuable symbols in the game, include; the cartouche, the lotus, the scarab beetle and Cleopatra. There are also the lowest of the paying symbols, which are mostly the card symbols, which have been adjusted in some way to make them acceptable to the theme of the game. there is a single scatter card represented by the Sphinx, if any of these two scatter symbols are found anywhere on the reels, the players amount wagered will be doubled, if the player lands three scatter symbols, the wagered amount is multiplied by five times.

Cleopatra is the wild symbol in the game, which has the ability to replace any of the other symbols apart from the scatter icon. Players are able to score in a high paying line, and also have the ability to double the winnings. The sphinx scatter symbols also activate the Cleopatra bonus feature, players are offered scattered payouts when they land three or more of the scatter icons, and the players are also awarded 15 free spins. It is possible for the players, to use the free spins up to 180 times. The non- progressive jackpot prize of 10, 000 coins are won when players have a total of 5 wild symbols lined on the reels.