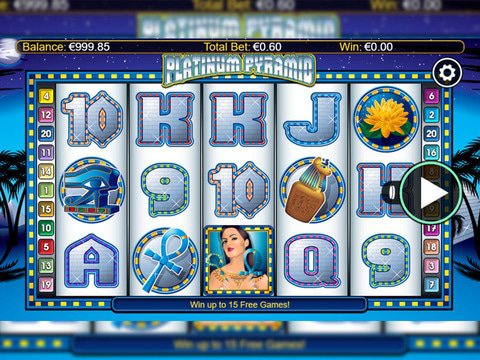 The Extraordinary and majestic Pyramid, is something that has already etched itself deep in the annals of history and as such, you'll get to see them represented in books, movies and even games. This is especially true with the gambling industry where you would never have enough of Egyptian themed games. Although this has already been the case for years now, games centered on Egypt and Pyramids have never ceased to be developed and one example is the Classic Platinum Pyramid Slot Machine from NextGen Gaming. It obviously takes a 'platinum' spin on the conventional Pyramid we know of but what more does it offer other than its obvious change of material? Look deeper into the depths of this Platinum Egypt Game and learn what it has to offer to its players, through its no registration Classic Platinum Egypt free play slot demo. No need to even download it so you can get to action right away.

Beauty of Egypt with a Spin

Taking the word spin and incorporating it to the essence of the game itself, the Classic Platinum Egypt Slot Machine has truly reinvented and redefined the Egypt-themed games. No longer does it provide the pristine, golden sands of the Desert and instead, it serves the beauty of Egypt in a silvery color, topped with a vibe like its deep in the night. The games graphics are nothing too amazing, hence its classic approach but there's no doubt that it takes a more serious approach when it comes to its highly rewarding features and prizes. At the center of the game lies the Reels of the game as well and of course, with a Platinum color. There are 20 paylines in this marvelous 5-reel game, while you can take your bet up to £200 per spin if you really want to maximize the rewards you can get from the game. You'll also see platinum card symbols in the game with pretty low paying prizes but, it more than makes up for it, through its symbols related to the theme itself. You'll see the eye of Horus, a yellow, blooming lotus, the platinum pyramid and Cleopatra. The Priestess herself is the highest-paying symbol of the game with up to 7000-coin jackpot prize, while on the other hand, the platinum pyramid plys the role of the Scatter. As the Scatter, it can pay you equivalent prizes anywhere it lands, but what is really enticing about it, is its free games feature. Though no more special features can be found after that, the game can still provide you with a highly rewarding experience.

If there's one theme you'll never run out of in the industry, that's Egypt-themed games and you'll certainly have a fun time if you play Pyramid: Quest for Immortality, from Net Entertainment. With a 5-reel and 5-payline symbol, the game may seem classic but its $10000-jackpot and stellar graphics would certainly tell you otherwise.

Take your trip to this Platinum Egypt while maximizing your winning opportunity, by playing it at Slots Million Casino. Not only will you have a great time with its cutting-edge software, customer support and more - it also offers a bundle of promotions right off the bat, from no deposit bonuses, free spins, dollar-to-dollar match-up and even more beyond your imagination.