Clash of the Titans

Clash of the Titans
Enjoyed playing this game?
Rate it → 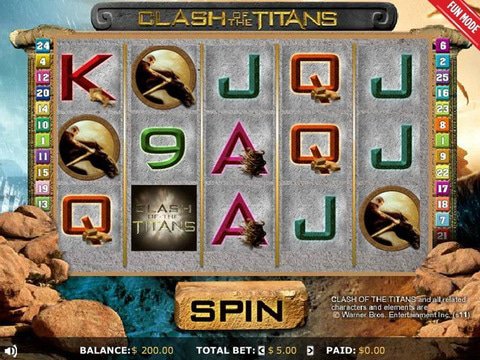 Clash of the Titans

Clash of the Titans Game Review

Experience the thrill of being in the battlefield as a mortal and clash against the Gods in this movie inspired slot installment from 888 holdings software. In Clash of the Titans slot machine, you will play as the Greek hero Perseus, who will embark in a journey to save the world of humans with the help of the Greek Gods from mythical beasts and creatures unleashed by the dark side. Succeed in every battle to earn the trust of Zeus and win exciting rewards as you spin the reels. You may now try this free play slot here with no download required.

Clash of the Titans Game Review

This five reel slot game has 20 unique paylines for its online and mobile players. You may place wagers for as low as 0.1 credits up to a maximum stake worth 100 coins per spin.

Just like any other slot games, you need to land sets of the featured reel characters and symbols to win the offered payouts. These include combinations of playing card characters which reward the lowest possible payouts ranging from 100 up to 150 credits. A combination of the scorpion character or the Kraken-like creature pays you a of 500 coin payout. But the highest paying combination belongs to the horse-ridden character which grants you with 1,250 coins.

Your main character, Perseus, represents the wild symbol of Clash of the Titans slot machine. It substitutes to any character on the reels - except for the scatters - to complete a winning line. Aside from this replacement, it also pays you instant cash prizes if you land it on active paylines. Win 10, 150, 1,000, or 10,000 credits for every 2, 3, 4, or 5 wild symbols in one line.

You can also get rewarded with bonus free spins by landing three or more scatter symbols anywhere on the reels. Watch out for the Clash of Titans logo which represents the scatter of the slot game to instantly get rewarded with 12 free games which have a 3x multiplier on all winnings.

There is also a Pick and Win bonus game wherein you can win instant cash prize from Perseus himself. Just land the Perseus characters on the first and fifth reel in just one spin to trigger this bonus round. Choose one of the two Perseus characters and reveal its equivalent prize.

If you are truly a Greek mythology junkie, then you must also try Saucify's Legends of Greece slot machine. The Legends of Greece is a five reel slot machine which has 20 paylines for its players. Get to meet Zeus, the Minotaur and the Hydra as you spin the reels on which you can wager on for as low as 0.01 up to 0.25 credits. Play with the highest possible stake to take home at most 100 times of your winnings.

You can no try the demo version of Clash of the Titans in 888 Casino with no registration required. Canadian players are also welcomed to play with real money wagers to get free spin and no deposit bonuses.