Clash of Queens
Enjoyed playing this game?
Rate it → 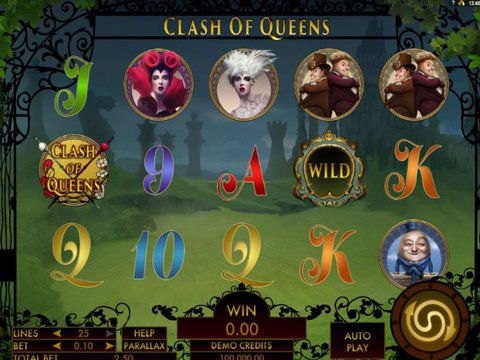 What happens when two very powerful monarchs collide? This is the whole premise of the Clash of Queens slot machine by Genesis Gaming. This is a very interesting and very immersive game. You will really spend hours on end as you try to increase your pot. You can try the no download, demo play on Slots Million Casino, which has over 1,100 titles listed.

In this game, there's the White Queen and the Red Queen and they both want control of the enchanted forest. Being that this is a fairy tale theme, you are going to encounter a lot of fairies and other familiar magical creatures such as Humpty Dumpty, for one. There's also Tweedledee and Tweedledum, the twins in the Alice in Wonderland.

The free play slot machine has five reels and 25 pay lines. In the backdrop, you see the enchanted forest. And because you have two characters battling for supremacy, you will have to pick sides. Pick smartly, however, because the bonus reward that you will win depends on the character you choose. Now, if your side wins, you can get extra features in the next round.

For instance, you pick the White Queen and your side wins in the Red Queen free spins mini-game, you get free extra spins. If your opponent wins, then you only get four extra spins. The White Queen feature, meanwhile, will allow the punter to choose pieces that are on the chessboard. Behind each piece is a corresponding value. Also, if your side wins under this feature, your winnings will be multiplied four times. If not, the value you win at the end of the White Queen feature will remain the same.

You can get to the bonus game--the White Queen and Red Queen Battle Mode--if you get three or more scatters on the reels. The scatter is the Clash of Queens logo and if it lands on 2, 3, 4 and 5 will pay you 2x up to 50x.

The wild, in this case, can replace the regular icons. Your winnings in the pay line may double in substitution action. You can see the Clash of Queens wild in reels 2, 3, 4 and 5.

The Clash of Queens slot machine features a novel idea and adds a whole dimension to your stake. Now, you are truly invested in the game and you now have extra incentive to be clear about your strategy. Unlike in other games where the gameplay is limited to just spinning, in this slot from Genesis Gaming, you will really have to be careful of your next move.

Clash of Queens can be played in the top Canadian gambling site Slots Millions Casino. If two warring monarchs is not your thing, you can try 1,100 other titles. Absolutely no download needed. Once you sign up, you will also get a signing bonus, where you can claim as much as $100 free cash. Slots Million is 100% certified with almost 99% payouts.