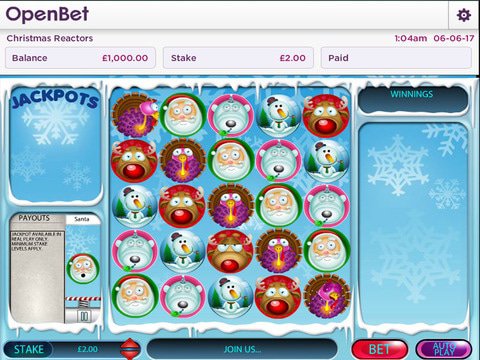 Christmas is truly the jolliest and merriest time of the year but more often than not, it becomes a fleeting and soothing time for those who'd want to take a break from the busy regular days of their lives. However, what about those who'd like to keep everything on high energy and spirit? The solution is simply at the library of games presented by Cozy Games. Though it may not be that well-known despite its decade of stay in the industry, its Reactor Series has already gotten quite the reputation for itself. The Christmas Reactors Slot Machine from this software is part of its renowned series, infused with the feature that breaks the common sense of the online slots world. Canadian gamblers will surely find themselves deeply immersed in this dynamic and fast-paced game and if you're intrigued about it, then it's time for you to visit the no registration and no download Christmas Reactors free play slot demo in this page.

If you've already accommodated yourself with few of the games included in the Reactor Series of Cozy Games, then you'll surely find yourself nodding in satisfaction as the Christmas Reactors Slot Machine retains the intuitive and easy-to-use setup of the series. The Jackpot, Pay table, winnings and the grid is placed right where they belong while the game uses a 5x5 grid for clearer and bigger symbols. Controls at the bottom and the surface of the game are as simple as it gets, but it is noteworthy to appreciate that the game comes with a snow-laden background compared to its predecessors that are a bit more lack luster in terms of graphics. Bets on the game can still reach up to a thousand bucks, and winning prizes can still reach up to 100000x your bet in the demo version. The jackpot version holds another symbol as the jackpot prize which evidently holds more stellar prizes up-for-grabs. At the grid, you'll see Santa, polar bears, snowman, reindeers, turkey and more. The audio of the game is also improved greatly, creating a truly addictive gameplay you'd be more than happy to go back to even when not on Christmas Season.

Some Canadians may find the ice-filled world of Christmas Reactors Slot Machine not very attractive as they may be seeking for warmer-themed games. Fear not as there's the Funky Fruits Slots from Playtech, which also comes in a 5x5 Grid and same reactor feature as the Christmas Reactors. It holds various fruits infused with hilarious expressions, topped with peerless prizes up for grabs for those who have the luck to meet the required explosions in terms of amount and symbols.

To reassure yourself a great, mesmerizing gambling experience while playing the Christmas Reactors Slot Machine, we recommend you to enjoy spinning it at Lucky Admiral Casino. Despite being newer than Cozy Games, the site holds a reputable and reliable stature in the industry whether it be on its topnotch system, customer support, banking options or overly rich amount of bonuses available. You'll be welcomed with a dollar-for-dollar match-up of up to 500 bucks while also granting you lots of opportunities in forms of regular tournaments, updated bonuses and exclusive VIP and Loyalty promotions.