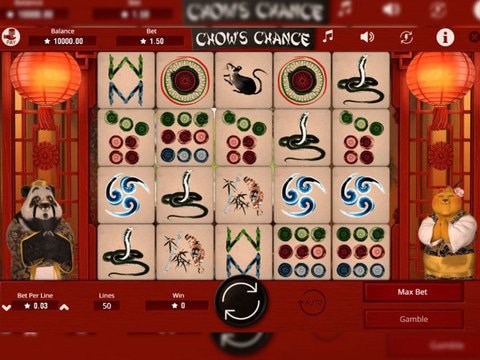 A software developing company would never be complete without some excellent Orient games up their sleeves. Despite Booming Games Software being new in the industry, it has definitely much to do to catch up to its competitors and just with the Chow's Chance Slot machine alone, it is crystal clear that it is gaining up to the top in seriously amazing pace. Though it doesn't take the industry by storm with ample amount of slots to boast, it more than makes up for it through high-quality games that's bound to get you hooked. This orient game oozing with the essence of Chinese culture is something that will surely give you ecstasy topped with unbelievable winning opportunities. If you're intrigued about it already, wait till you try it through the no download and no registration Chow's Chance free play slot demo in this page, and you'll surely be further impressed.

On the vast expanse in the Far East, lies a restaurant tinged in red with elegant Chinese designs that allows it to exude a truly marvelous aura of the Orient with lanterns that illuminates the room and reels that will make you feel like you're playing one of the most famous board game since antiquity - mahjong. However, the most surprising thing doesn't lie on those points alone because if you inspect closer, you'll see that at the side of the reels and in front of the two red windows, two pandas are standing respectfully in front of you. This anthropomorphic animals are not dangerous rather, they're even the ones responsible for giving you such a sweet time in this 5-reel and 50-payline game as they are the owner of this oriental restaurant. The audio in the background also amplifies the atmosphere of the game, gearing you up to some serious reeling action. With the 50 pay lines of the game, you could bet up to a staggering 150 coins per spin in this game while you stand to win way more than that. If you've played mahjong before, you'll surely be familiar with some of the symbols in the game while there are also animals such as a bird, rat and a snake. There are three special symbols you'll wish to land solidly on your reels and those are the Dragon wild symbol, the scatter flower symbol that can also bring good luck with its free spins bonus, and the air symbol that provides a special 2-Way Pay when triggered.

It doesn't take an expert to know that aside from Chow's Chance Slot Machine there are heaps more of Orient games in the market, one of which is the Wild Panda slots from Aristocrat. It comes with a more impressive structure containing 100 pay lines, but with a less impressive set of jackpot that only ticks at about $2000.

Advantages born from the site which you'll play the Chow's Chance Slot Machine in, could help you reap more benefits than you could imagine. We suggest you to give it a spin at Tropezia Palace Casino. This site exudes a reliable atmosphere with its multi-software and multi-language system, topped with generous payouts and promotions from match-up bonuses, VIP exclusive bonuses and more promotions that are updated regularly for you to take advantage of.