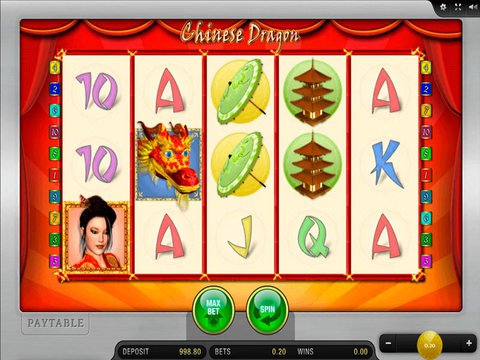 Dragons are considered mythical creatures that almost cross over to reality. Even today, there are some people who think they are real although there's no solid proof to back up their existence. You can play the demo for this title by Merkur Gaming on LVBet Casino and find for yourself all its features, bonuses and offerings. You can play Chinese Dragon slot machine and other dragon-themed games from the top Canadian gaming site. Each title, from the best developers around, listed on the website are carefully selected to make sure they appeal to all classes. All the games also have no downloads and no registration needed, while you also get free $1,000 welcome bonus and 1,000 free spins.

There's a stark difference between the Chinese dragon and its western counterpart. In the Eastern belief, dragons are revered because they bring luck. They are also more powerful than just breathing fire in the European version because they can actually affect weather patterns. This is why the Chinese light up incense or offer food in order to appease the dragon gods. Another difference is the depiction: whereas the Chinese dragon looks more like a serpent, the Western dragon has wings.

This one is quite simple, which is what you would like since Chinese culture can be quite complex and some people don't really want that type of complication in their lives. One proof of its simplicity is the backdrop, which is as basic as you can get.

There are five reels, three rows and 10 pay lines in this game. You can expect to see the temple icon, umbrella or the card symbols like the Ace, King, Queen, Jack and 10. However, it's not clear why the wild has a geisha for a wild symbol, which is weird considering that the geisha is a Japanese tradition. The only thing you need to know is that the symbol pays big.

Meanwhile, when you find three or more scatters, you will get free spins. Again, because Chinese Dragon slot machine is created by Merkur, there's the usual ladder game and the card game. Choose wisely so your rewards will be greater. You do need to put in money on each of the lines because they have fixed value.

Dragons are a popular theme for casino games. Aside from the Chinese Dragon slot machine, you also have Split Dragon, which will double your winnings if the mythical beings will "split up." In the latter game, the blue dragon and the gold dragon will offer huge rewards. There's also the Golden Dragon from Microgaming, where you can win as much as $25,000 for one spin. There are no scatters or wilds in this game so that makes it very straightforward. If you don't like your slots to be complicated then Golden Dragon is for you.