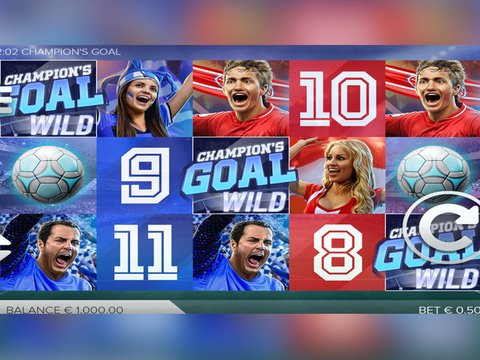 If you wish to have an easy time with the slot play at Slots Million casino where you not only enjoy the game but enjoy a myriad of bonuses. Upon launching the game, the player is presented with two team; blue and red. The teams are represented by symbols on the reels bearing their respective colors. The blue team score from left to right, and the right team from right to left. This means that the blue symbols win if they land on an activated winning line from left to right, while the red symbols win if they occur from right to left. In addition to the blue and red symbols are the red flare, the riot police VS fan symbol and the game's logo symbol. These additional symbols are considered neutral and pay both ways.

The game features bonuses and free spins whose activation mechanism carries on with the originality in the game's design. The free spins are triggered by the symbol of the cup, the ultimate objective for any football team. This symbol can only appear in the third reel. If a player lands such 3 symbols, they get 7 free spins.

The ball symbol appears on reels one and five. Getting this symbol triggers a free kick, where the ball is kicked toward the opposing team's direction. The kicked ball clears all the symbols on its way, which allows new symbols to drop into the empty spaces. Any winningcombination formed during this free kick period is given a 5x multiplier.

The wild symbol is represented by the Champion's Goal. In addition to this conventional wild symbol are Sticky Wild Corners represented by the referee symbol. These triggers an extra free re-spin. Another bonus feature is the Cascading Tifo that is activated by either landing all blue symbols on reels one, two and three, or red symbols on reels three, four and five. This feature triggers three free spins.

The complexity of the Champion's Goal slot makes the game much more exciting as the player is filled with the anxiety of watching a great football battle unfold on screen. The uniqueness and new features of the game adds to the excitement of playing and ordinary video slots game. Champion's Goal slot is available at grizzly where more free slot games online are available.