Chain Reactors All Sports
Enjoyed playing this game?
Rate it → 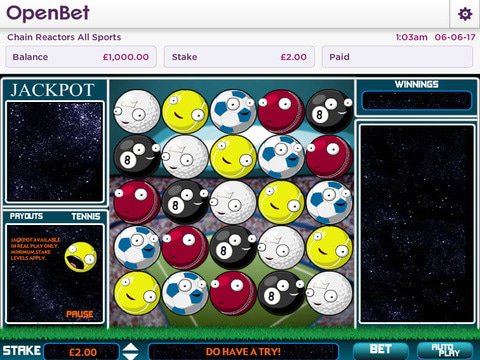 Despite the Chain Reactors 100 from Cozy Games, displaying quite a disappointing graphical perspective on top of its drastic twist, it has still become a great fast-paced choice for players who'd love to take a fresh of breath air from the usual online slots. In light to this, the software has once again tried to push its luck in this very same feature as it incorporated a different version to this Chain reaction game - the Chain Reactors All Sports Slot Machine. The theme of the game is also self-explanatory from its name alone and it obviously is aimed to the vast number of players from Canada, Australia, America or other parts of the globe who are die-hard fans of sports. However, will they bite this luscious attempt of the brand? Try out the game yourself and see if it's worth the time, money and effort through the no registration and no download Chain Reactors All Sports free play slot demo.

Explode your way to victory

Despite the change of theme, Cozy Games has stayed true to its predecessor Chain Reaction game. Not only did it retain the studded feature of the game, it also retained the artwork path that it has been known for. The setup of the game is the same as its parent, placing your winnings at the right box with a neat pay table at the lower left portion of the screen. The grid in this game however, only comes in a 5x5 size, giving way to bigger and more noticeable symbols unlike its previous version. Now, you'll see more clearly, the faces embedded on each type of balls in the sports world. The background is also a blurry look at a stadium, giving a bit of an immersive feeling to the game. Given that the mechanics are the same, 5 or more linking same symbols will explode and chain reactions are possible to continue as long as there are combinations existing. It is also important to know what each ball equates to and it will do you good to know that the Tennis ball is the jackpot on the game but is only available via real-money gaming. On free game version, the red ball plays the highest 100,000x your bet jackpot, giving way to the possibility of huge payouts.

It is definitely hard to find games that defies the laws of slots like the Chain Reactors All Sports Slot Machine, but playtech does have the perfect match-up for it - the Funky Fruits Slot. The game boasts a 5x5 grid imbued with freaky-looking fruits that brings off an oddly fun and exciting gaming experience. The chain reactions in the game basically has the same mechanics as the Chain Reactors, but it comes with a more sophisticated animation, graphics, audio and overall gameplay.

Despite the long arduous years of the software in the industry, only a few casinos are available to play the Chain Reactors All Sports Slot Machine. We recommend you to pick the Lucky Admiral Casino to make the most out of your time and money. This site grants massive bonuses and benefits to users in the form of a 100% match-up to $500, along with weekly and monthly promotions, tournaments and more.