Cat in Vegas
Enjoyed playing this game?
Rate it → 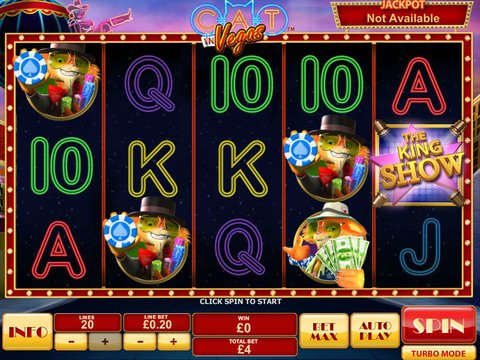 What if humans are suddenly banished from the Las Vegas strip and our feline buddies take over the sin city? This is what they tend to portray in this latest video game dubbed as the Cat in Vegas slot machine. In this game, Felix "" the most famous cat in the world "" takes control of the reels and helps you win exciting rewards and cash prizes. To know more of this game, you may try the Cat in Vegas free play slot here with no download required.

This 5-reel game developed by Playtech software has 20 active paylines, impressive payouts, and exceptional bonus rewards for its online and mobile players.

The aim of this game is to get matching combinations of the featured symbols and characters on the reels. These symbols include playing cards characters, three varieties of Felix the Cat, a 'Wild' logo, and the 'King of Show' symbol. Payouts on these combinations vary on the symbol itself, as well as the number of active paylines it cover.

Aside from these payouts, Cat in Vegas slot machine also offers its players with exclusive in-game features and bonuses.

The wild symbol, which is represented by the 'Wild' logo, substitutes all other base symbols on the grid to form a winning combination on a payline. A combination of three wild symbols on an active line rewards you with 100 times of your stake; four symbols are equivalent for a 1,000 multiplier, while five grants you with a whopping 1,000 multiplier.

Aside from the wild symbol, the 'The King Show' character "" which acts as the scatter symbol "" also gives you exciting rewards. Three or more scatters on the reels awards you with 20 extra spins and 5 sticky wilds.

Another feature is the Wheel of Luck bonus game. This is only activated when the Wheel of Luck symbol lands on the central reel of the grid. During this feature, Felix spins the wheel to determine the multiplier prize. He keeps spinning the wheel until it points again on a previously visited spot which will signify the end of the bonus feature.

The last bonus feature of Cat in Vegas involves the 'Bonus' characters. If these symbols land on reels 1, 3, and 5, the bonus game will start. During this segment, Felix will play four slots until all machines break down. These slot machines will reward you with multipliers and a possible win on the progressive jackpot prizes. After all the machines are played, this bonus round will end.

If you prefer other similar themed games, you may try Play 'N Go's Cats and Cash slot machine which has 5 reels and 15 fixed paylines. It also has a cat character as its wild symbol which grants you huge amounts of cash prizes and other perks. You may also want to try IGT's Cats slot machine which focus more on big wild cats.

With no registration needed, you may now play the demo version of Cat in Vegas in Slots Million Casino. Canadian players are also welcome to play with no deposit and free spin bonuses.