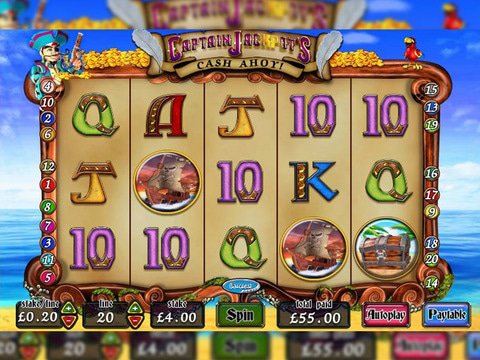 With the courage to traverse the seas, challenging other pirates along the way and conquering obstacles one after another, Captain Jackpots have amassed quite the sum of wealth already and through Barcrest Software it aims to give you the possibility to gain quite a lot from the treasures that he has already managed to accumulate through years of pirating. The Captain Jackpots Cash Ahoy Slot Machine from Barcrest Software shows off that the company itself has unquestionably stand firm and straight through decades of its operations. Looking past some of its setbacks, there's definitely a heap of things that you'll love from this game and if you'd like to know more about what makes this one of the top pirate games today, the Captain Jackpots Cash Ahoy free play slot demo will help you do so with no registration and no download to hassle you along the way.

The popularity of Barcrest Software simply can't be underestimated especially when we're talking about their UK market. This is also why their games come in pounds. With the pirate theme of the game, it is easy to imagine what environment it will present, but you'll still surely be impressed as the game welcomes you to a grand view of the vast, crystal clear ocean with the sky and sun illuminating everything. The game's 5-reel and 20-payline structure is neatly placed at the center of the game with border made of wood that complements the game perfectly. The game aims to look fun and invigorating and it is easy to know that just from the title alone as it comes with a colorful animation that surely attracts attention. The value of the game also has quite a range that can be identified with its maximum betting rate that could go up to £400 per spin. The rustic reels also contains simple card icons, the game's logo, Wild pirate flag with substituting capabilities, a treasure chest, pirate ship and captain jackpot himself. There are also three different bonus features in the game, which can be triggered by Treasure Chest, Pirate Ship and Captain Jackpot equating to three different types of bonuses that could bring luxurious prizes right through your doorsteps.

Aside from the tempting offers of Captain Jackpot, there's also the Pirate Island Slot from ISoftbet that packs quite a punch in terms of its rewards. Its graphics are simpler than what you'd expect but despite this simplicity in its 5-reel and 5-payline gameplay, it certainly is worth the while as there's a $3750 jackpot prize in the game. It is also very engaging and provides immersive gameplay, giving you no reason not to give it a spin once in a while.

Though incredibly relatively new to the market, we still recommend players to spin the reels of Captain Jackpots Cash Ahoy Slot Machine at Drueck Glueck Casino. Its age is pretty negligible especially with its extremely generous set of promotions and topnotch features. It offers a whopping dollar-for-dollar match-up bonus up to $100 of your deposit and juicy 25 free spins. Other than that, it is even available in instant-play, download or even through mobile device. More generous offers also awaits you if you end up joining their illustrious programs.