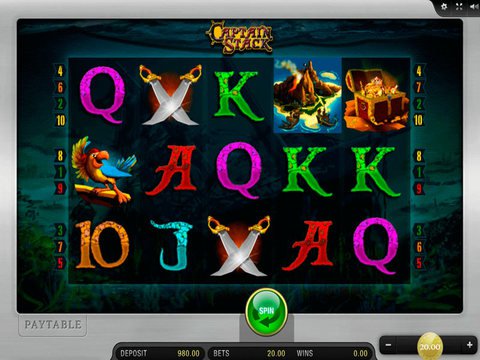 Pirate slot games have always been a crowd gatherer because of the mystery and adventurous journeys they are reckoned with. Captain Stack, developed by gaming giant Merkur Gaming, is one of the most interesting pirate-themed game with tons of great prizes and an endless adventure to find the hidden treasure buried by the hero himself. A no download no registration required free demo of the game can be found on this page Merkur Gaming to get you into the action quickly.

Captain Stack's storyline goes deep into venturing in the deep seas hoping to find the lost buried treasure containing lots of gold and riches. The game features have a mix between absurd and comical as the soundtrack used in the game can be mistaken as a part of a pirate movie you've seen before and the graphic is a little quirky.

The game is surprisingly fun for a simple game that has loads of graphics that can cover the entire screen of your computer. The game has octopus like symbols that are colored like something out from the deep blue sea. The background also adds to the magical spell of the game reminiscent of the darkness of the deep blue with plants strewn behind the spinning reels.

Captain Stack is a 3 row, 5 reel slot with a maximum of 10 fixed pay lines. It offers a huge opportunity of free spins with winning combinations, making the shadowy game a pleasant surprise. Reel symbols represent what you would commonly expect from traditional pirate motifs including a skull which plays as the scatter symbol, a pirate island with the role of a wild, a treasure chest filled with gold loots, a crossed sword, a ghost pirate, and the pirate's pet hornbill.

A combination of 3,4, or 5 scatter symbols will unlock the respective free spin of 10, 25, 100. When playing the bonus games, the wild symbols will be stacked so you can have a bigger loot. The ghost pirate is the highest paying symbol and can be part of a winning combination that pays either from left to right or vice versa. The pirate island can change any of the symbols except for the pirate skull in front of the steering wheel.

The soundtrack is something you would expect from a slot game having a pirate theme. It can be both creepy and whimsical at the same time. Overall, the game can deliver pure fun and quality entertainment despite being a little shadowy.

Games like Ahoy Matey by Booming Games has the same exact pirate theme where you have to look for the pirate's treasure chest. Both games are visually stunning with the same 5-reel slots and has the same slot game features including wild symbols, scatters, and free spins.

Canadians who are willing to try a game of Captain Stack can visit LVBet Casino. They have some of the best deals when signing up and tons of other surprises for playing a game or two. Captain Jack is surely something you would want to try if you want to have an exciting adventure that includes finding a stash of gold.