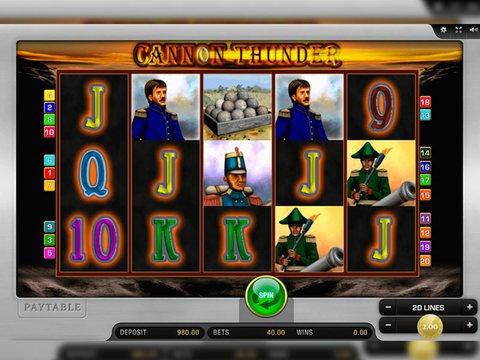 Cannon Thunder is a recent release from gaming giant Merkur with heavy exploding cannon balls with a bang for your bucks. Cannon Thunder is exactly what the name suggests, cannons with lots of cannon duels and explosions. It has a nice graphic rendition of every part of the game with the artillery detonating before your very eyes. A no download no registration free demo of the game can be found on this page Merkur Gaming.

Cannon Thunder takes you to the early era of the military where cannons were used as the leading weapon to trump opponents. Merkurs great graphics provide a good gaming experience which gives it a realistic 1800s environment. The game has a wonderful representation of the sceneries during the era giving you an authentic feel of being a cannoneer during the war times.

This magnificent game from Merkur is a 5 reel, 3-row slot game with 20 possible pay lines. It gives you an opportunity to be part of the excitement of the Civil War and get amazing rewards. Before getting into the action, you'd have to acquire a combination of the pile of cannonballs which are the scatter symbols. It can only be done by winning a combination of 3, 4, or 5 scatters landing on any of the reels.

Getting the scatter bonus allows you to get a respective total of 10, 15, and 20 free spins. A free spin then allows you to have the 3 cannons individually placed on the right side of the reel moving towards the left with every spin. When the cannon reaches the first reel, it stays there the duration of the entire bonus game.

Cannons are considered as the wild symbol of the game which can be used as a replacement icon to win a payout combination. It can be used to replace any of the symbols aside from the scatter symbol which is the pile of cannonballs. If your pay line has a cannon symbol, it doubles the amount of your payout which is a good incentive for the game.

Increasing the amount of your reward is one element of Merkur games that make it more interesting. There is an unavoidable game attached with every winning to increasing your payout or losing it altogether.

Cannon Thunder is a good game with good graphics to name a few. The interesting gameplay makes it a good game with a surprising catch that anyone can try out. This history game is surprisingly fun especially when it includes uniformed civil war soldiers and an artillery that has been part of our traditional and cultural war regalia.

There may be hundreds of slot games with a historic theme but Cannon Thunder is one of the first to feature an aged war armament as its central theme. History war-themes slot games such as Battle of the Atlantic, by OpenBet, takes you back in tumultuous times, but with this game no blood is wasted only tons of great rewards.

Getting into the action can be easy if you live in Canada. Online sites such as LVBet Casino gives every player the opportunity of winning huge prizes and hundreds in amounts of signup bonuses and other freebies.