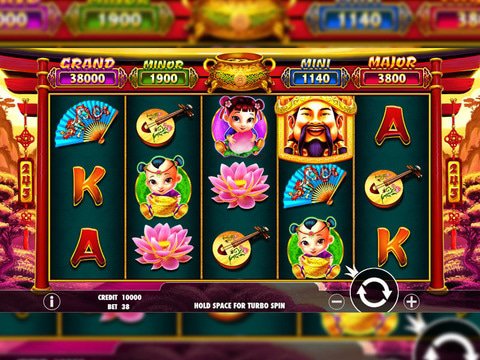 Oriental games within the boundaries of the gambling industry, is something that is highly sought for yet also most commonly used theme nowadays. However, if you want to experience something more unique and refreshing in the middle of the common Oriental games, the Caishen's Gold Slot Machine, is definitely the freshest path for you to take. Created by the exquisite yet one of the newly established developers in our generation, the Pragmatic Play Software, this game has truly been made with innovation and the New Age in mind. Still, one may end up being skeptical about it. After all, it's yet another Orient game only and there are hundreds of it in the market. You can test the waters yourself through the no registration and no download Caishen's Gold free play slot demo in this page, which will tell you everything you need to know about the game.

An Imperial Wealth up for Grabs

Being one of the newest developer in our generation, Pragmatic Play reassured to bring its A-Game at the front plate of the scene, which is made evident with just its Aesthetics alone, which is nothing short of perfection. It is vibrant, scintillating and pristine in every way when it comes to appearance and this also goes true with its highly motivating Orient audio that will keep you spinning its reels. The game's overall graphics - from background, pristine symbols and reels, is created with superb colors and attention to details, making the game even more attractive for any players. At the center lies a 5-reel structure, empowered with 243 ways-to-win setup, making the game rewarding on top of being aesthetically outstanding. There are still card symbols in the game as well but on top of them, you'll see Chinese string instrument, a fan, a blooming pink lotus, a Chinese girl and a Chinese boy. Of course, what makes the game more rewarding aren't this simple symbols - there are also special symbols that you should look forward to. The Scatter Symbol, for one, is a symbol that provides free spins for more opportunities while finally, the Chinese Emperor plays the role of the Wilds in this game. He is the most supreme character in this 5-reel game because aside from being the Wild of the game, it is also the bonus symbol that will trigger bonus games, which can land you on one of the four great jackpots of the game - the mini, minor, major and the Grand jackpot of the game with up to 1000x winning amount based on your actual bet.

Habanero has also delved into the world of the Orient but instead of featuring its grand, Imperial side like the Caishen's Gold Slot Machine, the brand has focuses on martial arts with its Shaolin Fortunes Slot. It also has a whopping 243 ways to win jam-packed in its 5-reel setup but a more straightforward jackpot of up to $20,000 with no variation of jackpots like what Caishen offers.

With stunning rewards on the line, it is only right for you to play Caishen's Gold Slot Machine, through the Slots Million Casino. It's one of the most sought place in the industry today with dollar-to-dollar match-up welcoming you along with 100 free spins bonus, coupled with more regular bonuses for you to use.