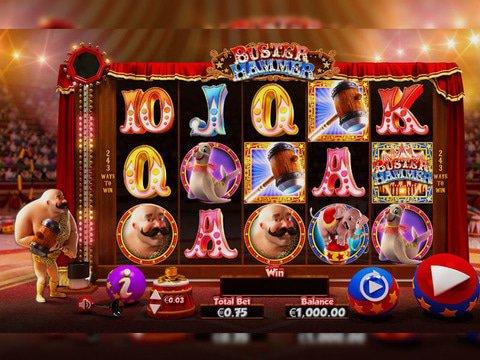 New software developing companies in the gambling industry find themselves hard-pressed at the beginning with all the intense competition surrounding the premises of these court. Chance Interactive is one of these new kids in the block, but this particular company itself is something that many avid wagers found very promising with its eyes set on the limelight. Though it may be far from contending with the Big Boys, it has taken some of its first steps with its newest slot games, one of which is the Buster Hammer Slot Machine. Cool as its name may be, don't be misled as it's far from being a fantasy game with cool weaponries and alike - this game is centered on the Carnival with Buster Hammer as the centerpiece. If you want to know if the company and the game would be worth your while, meet it face-to-face by playing the game through the no registration and no download Buster Hammer free play slot demo in this exact page.

Busting your Way to Fame and Glory

For a new software-developing company, it is evident that it has aimed to provide the most innovative games that are rampant and dominant in the market today. The graphics and the features of the Buster Hammer Slot Machine are peerless and there's no doubt you'll end up in awe and amazement as you take the perspective of one of the participants who are ready to give entertainment to the audiences. The crowd in this Chance Interactive game is very easy to please as you only have to spin the 5-reel and 25-payline matrix of the game and wait for Buster Hammer to act out. The game puts forth an ephemeral and compelling visuals with solid and vibrant 3D Designs that makes it very immersive. The controls of the game comes with a design that seamlessly blends in with the surrounding, while it is made sure to be as simple and as intuitive as possible. The betting range of the slot maxes out on €62.50 per spin and there are quite a lot of noteworthy symbols as well. The game logo acts as the scatter of the game that awards prize wherever it falls while also granting free spins to players. The hammer on the other hand, is the Wild of the game with common wild features on top of a multiplier and a triggered animation from Buster. There's also an elusive, random seal feature, granting massive multipliers in an ephemeral fashion for those who proves to be worthy and lucky enough.

Carnival aren't only Circus acts like what Buster Hammer Slot Machine portrays. Music is also imminent in this type of occasion which can be seen on the colorful world of the Wild Carnival Slot Machine with flashy design and robust instruments on its 5-reel and 50-payline gameplay designed by Rival Gaming. The game is truly riveting and immersive, but what makes it truly special is a decent 7000-coin jackpot on top of it all.

Due to the fact that the company is new, there are only few games in its library and of course limited establishments to play it in in which case we recommend Sin Spins Casino. It is a haven for gamblers with its free spins bonus, match-up bonus and more topped with its peerless system.