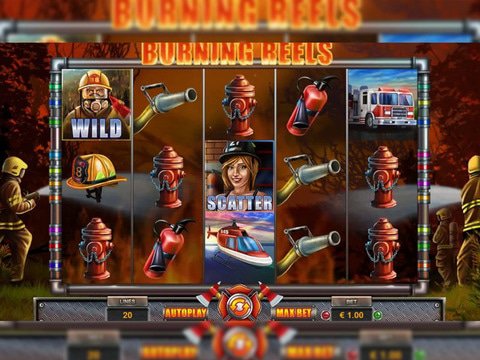 Not everyone finds firemen as heroic but, you can see from kids that from their pure and taintless knowledge of the world, even they adore firemen and their dangerous job. The adoration which some holds toward this group of people is simply not because of the difficulty of the job but rather, the fact that it involves saving human lives. With this kind of feat, don't they deserve to be integrated into products that would be hailed even until the future? Wazdan Software definitely feels this way and as such, it has developed the Burning Reels Slot Machine, a game that treads on fire and the life of those who save people from it. The invigorating feeling of saving someone from a burning building can be felt in spinning the reels of this game but if you're unsure of it, you can always play risk-free with the no download Burning Reels free play slot demo.

The Heroes from Fire

Instead of the glorious comeback after a job is finished, Wazdan Software has undisputedly outdone itself by portraying the exactly intense setup of firemen stopping fire. The game shows a forest burning relentlessly with only two firemen at work from both sides of the 5-reel and 10-payline gameplay. The graphics of the game are truly impeccable and is something that's hard to believe to be from a relatively new kid in the block. Although the game's setup is not the most comprehensive, the easy and intuitive control system is already enough to make up for it topped with a betting range that can even extend up to 100 coins per spin, which can already be an attractive point for diverse levels of rollers. In the game, you'll see varieties of symbols related to fighting fire - from a fire extinguisher, a street water pump, helmet, badge, the fire truck, helicopter, axe, hose and the two firemen. The fireman plays the role of the wild while the firewoman plays the role of the scatter. The fire alarm on the other hand, plays the role of the multiplier. These three holds capabilities that may not be new to you since the wild can be substituted for other symbols to help in gaining winning symbols, the scatter is for free spins while the multiplier is as its name implies. By triggering these special symbols, the game becomes even more intense and animation at the background becomes more invigorating. From the big picture down to the most minute details, the game is impeccably profound and something that you'll surely want to play immediately.

Fighting with Fire? Amaya Software also has its fair share of firefighting game like Burning Reels Slot machine which is the cash Inferno Slot Machine. In terms of graphics, it is vastly outstripped by Burning reels. It comes with a simple 5-reel and 9-payline matrix with a straightforward and low-paying gameplay, topped with a thousand-coins jackpot.

If you want to help the fireman of the Burning Reels Slot Machine even more whilst gaining equal chance for fortune, play the game at Magical Spins Casino. The site is one of the most prestigious especially when it comes to slots as it provides not only delectable welcome bonuses, but also regular bonuses that are assigned for different days of the week.