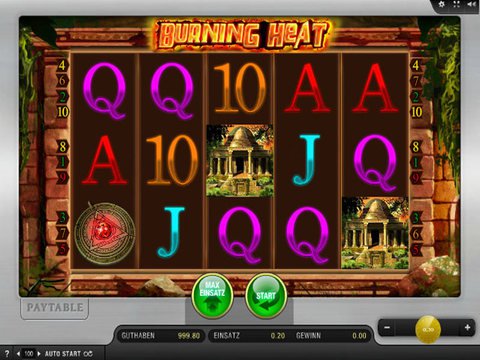 Burning Heat is an exciting slot machine game from Merkur Gaming which takes you straight into an intense adventure exploring volcanoes spurting hot molten lava. This game has an incredible graphics with hours of reel spin excitement and heart pounding chances of winning tons of rewards. If you want to try the no download no registration a free demo can be found on this page Merkur Gaming.

Burning Heat is made with a solid groundwork of providing free spins and giving sizeable payouts. This is a good game for reserved players but would like to have fun and get the best out of every bet. It can also be the best gaming choice for starting players to get a good hold of slot machine games without being put down.

Playing a game lets you cruise straight into the action with this 5 reel, 3 row game from slot game developer Merkel Gaming. Your chances of winning a combination can be increased with 10 fixed pay lines and other great bonuses.

This slot adventure game has an interesting soundtrack that engages you throughout your game. Winning a combination will open a heart-pounding music that leads you deeper into the excitement.

The game becomes more exciting as the setting of the game takes place with an archeologist exploring a temple near a volcano which is about to erupt. He searches for the golden Buddha hidden within the temple. Finding the hidden god and removing it from its pedestal disturbs the volcano causing it to erupt.

The game lets you explore the nearby land with tons of great excitement and exhilarating prizes that are easy to achieve. Symbols from the game include the map, an exploding volcano, a golden Buddha, a mystical temple, and the treasure hunter.

Low paying symbols are the usual deck of card images. The wild and scatter symbol is represented by The Volcano and can be used to replace a reel to complete a winning combination. Placing at least three Volcanos in the reel will awaken it and will be replaced by a glowing volcano about to erupt and open the bonus games. A winning payout combination will replace the glowing volcano with an extinct lava symbol.

Finishing the game will allow you to choose from either a ladder or card gamble game which increases the price of your current payout. Overall, this is a good and captivating game especially for those who try to seek a rewarding adventure. It has a good graphic design and animations will leave you glued to the screen during gameplay.

Volcano Eruption, created by NextGen is a similarly themed game with a volcano that is about to explode. The game has animal symbols who are trying to escape from a bad plight. Similar to Burning Heat, this game also has 5 reels but with 25 pay lines.

If you want to experience an exciting adventure, playing an adventure game from online sites including LVBet Casino can be fun and rewarding. They have tons of exciting games to choose from with bonuses including a No deposit and sign up gifts just for playing a game.