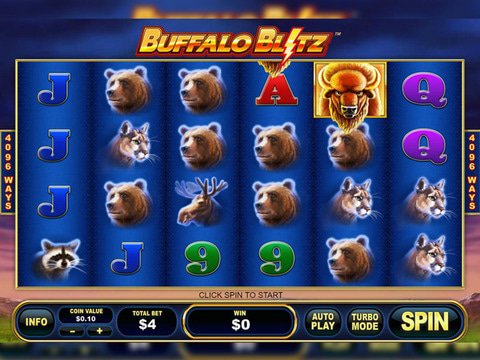 With the rise of video slot games inspired by the safari plains of Africa and the jungles of South America, it is absolutely fresh to hear similar games which are set on the colder climates of North America and Russia. In Buffalo Blitz slot machine, players will still experience a safari-like game but in a different view of the northern hemisphere region with the famous American bison or buffalo. You may readily experience this new game by playing Buffalo Blitz free play slot here with no download required.

This slot developed by Playtech software has 6 unique reels (rather than five) and 4096 active paylines for its online and mobile players. This huge number of active paylines also gives its players 4096 ways to win huge cash prizes by finding the right combinations in the reels.

These symbols you should look out for include card numbers and letters, a bear, a moose, a raccoon, a lynx, and a buffalo. A line up of two to three in-game characters and symbols on an active payline rewards you its corresponding multiplier. These multipliers range from at least 10 times up to 250 times your stake.

The top multiplier value you can win amounts up to 300 times your total wager. You can only earn this maximum payout bonus when six buffalo characters align on active payline. Since it is also considered as stacked symbol, it increases your chance on getting this combination as you progress on the reels.

There are two special reward features in Buffalo Blitz slot machine. First is the wild symbol bonus which gives you a random multiplier once it is activated. The glittering diamond character on the reels represents the game's wild symbol. This wild appears on reels 2, 3, 4, 5, and 6 and it substitutes all other base symbols on the grid except for the Free Games character. It also randomly triggers a 2, 3, or 5 times multiplier during the spins.

wild symbol multiplier feature is also in effect during these free games. This means that your winnings during this free games bonus will be randomly multiplied if the wild symbol appears.

If you prefer other animal themed games, you may try Rival's Blazin' Buffalo slot machine. It has 5 reels and a fewer number of paylines with 50 active lines only. Compared with Buffalo Blitz, this game has more special in-game features and bonus rounds for its players. But since it has fewer paylines, you may have lower chances on winning instant cash prizes during spins.

Other games you might want to consider are Jungle Games and Wild Safari slot machines. Both these games also reward its players with impressive gaming graphics and exceptional prizes.

With no registration needed, you may now try the demo version of Buffalo Blitz in Slots Million Casino. Canadian players are also welcome to play with no deposit and free spin bonuses.